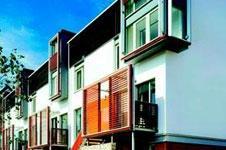 Chancellor Alistair Darling attempted to rescue the housebuilding sector with a package of measures designed to stimulate demand, cut regulation and deliver development land in this week's Budget.

The moves will also see a ministerially-led task force set up to tackle key issues, including the regulatory burden.

The pledges were contained in an electioneering Budget that stalled on many of the major issues, including where cuts in capital spending would fall, but contained welcome news on infrastructure funding (see right) and help for small businesses.

In a major victory for Building's Charter 284 campaign, the government committed to reducing the regulatory costs on the housebuilding industry.

The Treasury documents said the government had identified the supply of viable land, the regulatory cost on the industry and skills as the key challenges facing the industry.

It said it would set up a "ministerially sponsored action group to address these challenges and develop proposals for action".

The government said it would introduce central targets for public agencies, including councils, to release publicly owned land for housing development.

It would also cut planning grants to councils who failed to identify a viable five-year supply of housing land through the planning system.

In addition, the unexpected cut in stamp duty for homes worth under £250,000 for first-time buyers was warmly welcomed by the Home Builders' Federation, which described it as a "huge boost to the housing market".

Roger Humber, strategic policy adviser to the House Builders' Association, said the action group was welcome "as long as it's not a talking shop to further the government's political objectives of restructuring the industry".

Darling also focused on small businesses. About £2.5bn was unveiled to support SMEs, along with a one year business rate cut from October.

Meanwhile the tax allowance for small firms to invest in new plant and machinery was doubled to £100,000 (for other measures, see "at a glance" box below).

Noble Francis, economic director at the Construction Products Association, said: "This just shows that the real budget is to come after the election, determining where spending cuts are made."