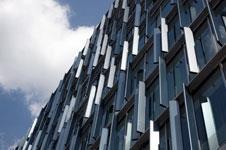 Seven of the firm’s projects were chosen for the ‘very best in excellent office space’ at the BOC Awards.

The ‘best of the best’ prize went to the Lawn Tennis Association National Tennis Centre in Roehampton for which the firm provided specification consulting services for the architect, Hopkins Architects.

Other winners included the Blue Fin Building in London which was awarded the national and regional award for best corporate workplace. The firm acted as employer’s agent and provided project and cost management as well as specification consulting for the project, which opened last year.

Colmore Plaza in Birmingham was also a regional winner, taking home the ‘best commercial workplace’ award for the Midlands and East Anglia region. Davis Langdon provided cost and project management services on the project, and is also a major tenant of the building.

The firm provided cost management and specification services on Unilever House which won the award for the ‘best refurbished/recycled workplace’ in London.

In Scotland the Minroy & Wood headquartes Building in East Lothian, which won ‘best small project’, was project managed by the firm.

The ‘best commercial workplace’ was awarded to No 1 Quartermile Square, Glasgow with specifications services provided by Davis Langdon.

The Building Construction Industry Awards 2008 were held in London on Wednesday 8 October 2008.

The Young Vic Theatre won the Building Award for ‘projects valued between £3m and £50m’.

The Judges said: "Theatrical in every way, the Young Vic has successfully met the very special demands and aspirations of the client and the needs of the performers."