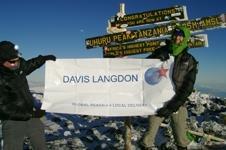 Consultant's regional staff to reach 350 by April, with expansion in Bahrain, Abu Dhabi and Qatar

Davis Langdon says it will increase staff numbers at its Middle East offices by more than one-fifth in the next few months.

The recruitment drive will cover three of the firm's five offices in the region, at Bahrain, Abu Dhabi and Qatar.

The consultant's other two offices at Dubai – where 120 staff work in the firm's Middle East headquarters – and Lebanon are not expected to increase staffing.

The consultant's total regional staff of 285 people will increase to 350 by the end of the its financial year in April, according to Derek Johnson, Davis Langdon's head in the Middle East.

He said of the expanding regional offices: “Those three areas are the ones where we see the most growth. Abu Dhabi has had more considered growth plans where Dubai has accelerated through.”

New staff are expected to be a mixture of British expats and those the firm will recruit from its training academy at Manila in the Philippines.

Davis Langdon is working on a giant campus on the outskirts of Doha in Qatar called Education City. Johnson said it is also involved with Abu Dhabi's 2030 masterplan to revamp Abu Dhabi island. In addition, it is working on a number of residential schemes in Bahrain.

The consultant first headed for the region back in 1948, when it set up an office in the Iranian capital Tehran as part of a project it was working on with oil firm BP.