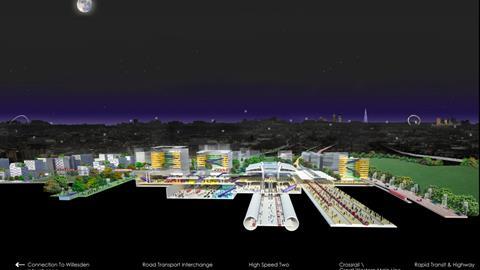 The images were prepared as part of Hammersmith & Fulham council’s submission to the Department for Transport backing the government’s plans for a high speed rail line (HS2) between Birmingham and London.

Sir Terry Farrell said: “High Speed Rail is not just a transportation strategy it’s a nationwide economic catalyst that requires creative place making. This is an incredibly exciting opportunity to reshape and unblock the development of a critical part of north-west London, and crucially to have a huge impact on the country as a whole.”

Councillor Stephen Greenhalgh, Hammersmith and Fulham council leader, said: “HS2 is the fastest way to deliver much need new homes, jobs and opportunities in one of London’s poorest areas as well as adding much need capacity to our creaking rail network.”

“The Old Oak super hub is vital to making the overall HS2 plans work properly as it will relieve pressure on central London terminals, like Euston, that will not be able to cope with the huge number of additional passengers on their own. In turn HS2 will be the catalyst to create Park Royal City - transforming the capital’s Bermuda Triangle of inactivity into a thriving new city.”