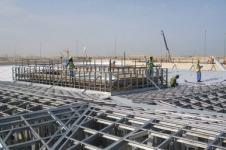 Qatar based structural steel contractor Panceltica has raised the possibility it could be wound up as a dispute with Qatari developer Barwa escalates.

In a trading update this morning the AIM-listed firm said the row had forced it to consider the sale of its steel technology group Scottsdale in addition to its Qatari operation.

It said: “Following such disposals the company would not be in a position to continue as an independent business and the board would seek to arrange a sale of the company and in the absence of which would proceed with winding up the company.”

Earlier this month Building revealed that the Panceltica top management team had fled the country over fears they face jail because of the wrangle with Barwa.

It is understood that chief executive David Ball and several key managers decamped to Dubai in May and are consulting lawyers about their next move.

The original row relates to a $343m (£210m) 2,000-unit residential scheme built for Barwa in Doha, the Qatari capital. The job remains unfinished after a dispute surfaced last December between Barwa and Panceltica over issues such as contract variations, the settlement of subcontractor deals and potential damages due to delays.

According to a source close to Panceltica, Ball moved to Dubai after being told that under Qatari law he faced prison or having his exit permit withdrawn if the firm wrote cheques that bounced.

The source said: “Panceltica is not getting paid because of the dispute, a situation made worse because Barwa is its only client.”

Barwa is also an investor in Panceltica, which is listed on the alternative investment market (AIM). In January, Barwa upped its stake from 14% to 20% by way of compensation for the delayed scheme, and last month it emerged Panceltica was considering allowing the developer to take over the whole of its Qatari operation.