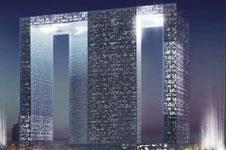 The head of the 73-storey Dubai Pearl mixed-use development has said the downturn is helping developers drive harder bargains with builders.

Abdul Majeed Al Fahim said the number of contractors available to carry out work has increased as the number of shelved projects rises.

He said: “At one point, you were at the contractor's mercy. You really had to listen to them. But now more than one interested part is going to show up, so you will get a lot of good attention.”

Al Fahim said work on the scheme is set to begin shortly. It will be built by Al Habtoor Leighton, a partnership between Al Habtoor and Australian contractor Leighton.