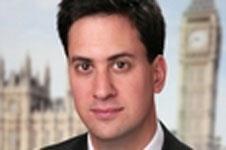 Climate secretary Ed Miliband has made an impassioned defence of the construction of power stations in a speech yesterday to the Labour Party conference in Brighton.

Miliband said Labour was the only party committed to reforming the planning system in a way that allows new nuclear power stations, wind farms and clean coal stations to be built. In contrast, he said, the Conservatives would carry on with "business as usual" in these areas.

He said: "Business as usual gives a veto to the minority who say no nuclear, no wind power and no clean coal either.

"But being bold mean reforming the planning system as we are the only party committed to do, and the Tories have refused to do, and standing up in the face of the minority who would say "no" to every form of low-carbon energy."

The Tories have said they are opposed to the infrastructure planning commission, currently being set up, which is designed to speed through planning permission for major infrastructure projects, including energy generation, seen as having national importance.