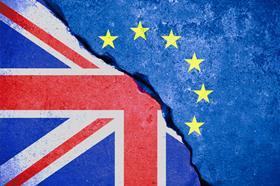 Brexit appears likely to severely impact London’s construction industry, according to the latest figures from the Office of National Statistics.

In London, 28% of construction workers are EU27 nationals and 7% are non-EU nationals, significantly higher than the proportion across other industries in the city.

Excluding construction, just 13% of London workers are EU27 nationals, while 10% are non-EU nationals.

The construction workforce in the capital is also likely to take a greater hit than the sector nationwide where just 7% of workers are EU27 nationals and 3% are non-EU.

Of the 165,000 EU27 nationals working in construction across the UK, around 49% are Polish, Lithuanian, Czech, Hungarian, Slovakian, Slovenian, Estonian or Latvian.

About 29% are either Romanian or Bulgarian, while 10% Irish nationals.

The numbers do not include sectors such as architectural and engineering services and quantity surveying meaning the number of EU nationals working across the sector is likely to be significantly higher.

The figures also revealed an ageing local workforce, with 47% of UK construction workers aged 45 and over, compared to just 18% for non-UK workers.

Manny Aparicio, national head of project management at Naismiths, said the figures showed it was “crunch time for the UK construction industry”.

He said:  “The London construction sector is particularly exposed to potential fallout from Brexit, as more than a third of its workers are from EU and non-EU countries.

“The youngest blood in UK construction is currently the non-UK nationals but if Brexit makes the UK a less attractive place to work then that demographic could disappear at the same time as the older UK hands retire. It’s a double whammy.

“If Brexit does make it harder for overseas workers to take up jobs in construction, due to increased red tape and potential costs, the construction industry will suffer.”

He said those involved with the construction sector needed to recognise the potential cost increase of workers during the decade ahead.