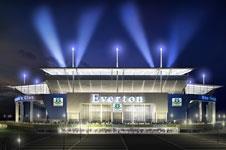 Local council gives assent but public inquiry could yet be called on £400m Kirkby scheme featuring Tesco and 50,000-seater stadium

Everton Football Club has won planning permission to build a new stadium at Kirkby as part of a £400m mixed-use development.

Knowsley Metropolitan Borough Council has given full approval for the scheme, which includes a hotel, offices a Tesco superstore and 50 shops as well as the club's 50-000 seat football stadium.

Councillors voted 20-1 in favour of the scheme after hearing evidence from 10 objectors and six supporters. Several local councils, including Liverpool council, had objected on the grounds that the development breached town-centre and retail planning policies.

The scale of the 85,500m2 scheme means that it will automatically be referred to the Government Office for the North-west to decide whether to advise communities minister Hazel Blears to call a public inquiry. A decision is expected within three weeks.

Work on the scheme should start later this year if final approval is obtained. Everton FC hopes to move from its old home at Goodison Park in time for the start of the 2010-11 season.