Working with Aecom, the practice will draw up detailed designs for the station, which forms the centrepiece of Singapore’s new financial centre at Jurong Lake, with platforms embedded below ground and an over-site development forming a new focal point to the district.

The station will be connected to the existing Jurong East MRT station as well as a stop on the planned Cross Island.

Farrells’ Singapore win follows on from the practice’s work in China where it designed the Beijing South and Guangzhou South stations. The firm also worked on the masterplan for the mammoth Kowloon terminus in Hong Kong.

Farrells director Stefan Krummeck said: “The terminus is touted as a game-changer for Jurong Lake District

“The majority of the station structure is hidden below ground, so we felt it crucial to mark the station’s presence as a focal point and catalyst for the success of the district with a sculpted and elegant station hall.” 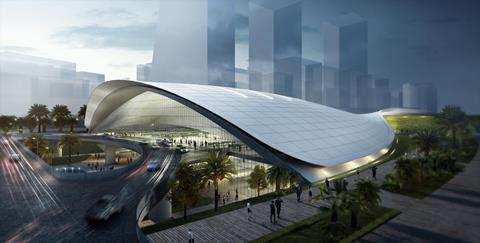 Earlier this month the Singapore Urban Redevelopment Authority appointed UK practice S333 as part of a multi-disciplinary team including Arup, Dutch firm KCAP and local practices SAA Architects and Lekker to develop a masterplan for the vast Jurong Lake district.

Both schemes are part of the wider 350 km long Kuala Lumpur-Singapore high speed rail project which will connect Singapore to the Malaysian capital in only 90 minutes. It is expected to open in 2026.