Bids go in next month

Contractors are being lined up for a role on a £1.2bn project to build a new heat and power plant in north London.

Firms are being asked to bid for a £107m contract to carry out two parts of the project that will see new facilities built on a 16ha site at Edmonton.

The North London Waste Authority (NLWA), which is the client on the job, is looking for a contractor to take on the design and build contract. 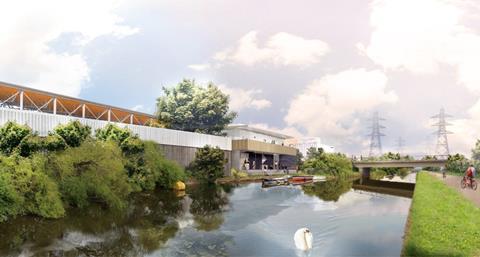 How the EcoPark House visitor centre will look

The successful firm will be responsible for the construction of a Resource Recovery Facility, to be located in the south of the site on Advent Way, which is where bulky waste will be separated for recycling and will also be the location of a recycling centre for the public and businesses from 2023.

The winning firm will also be required to build a neighbouring visitor centre and office complex.

Contractors have until 3 December to register their interest in the project, which is being built near Enfield council’s Meridian Water regeneration scheme, with NLWA set to invite a shortlist of three firms to tender by 13 January next year. A winner is due to be named by the summer.

The new facility will treat up to 700,000 tonnes of waste and provide enough electricity to power over 127,000 homes.