The first winners on a £1bn framework in east London for Barking and Dagenham council’s regeneration company Be First have emerged.

Be First has split its framework into two with the smaller value lot taking in jobs of up to £20m.

The minimum value of work for the larger lot is £10m but a number of deals on the four year framework will be north of £50m with some jobs approaching £100m.

The tender process included a competition to build a live project and submissions were assessed against their ability to deliver a £5.5 million refurbishment of the Sacred Heart convent in Dagenham.

This has been awarded to Murphy who will build nine flats and 20 new houses at the site.

Be First commercial director Iain Ferguson said: “It was an exhaustive selection process but we’re delighted to welcome these four to the framework.”

Five firms – Kier, McLaren, Wates, Willmott Dixon and Bouygues – are in the race for the larger deal which is set to be awarded next month.

The first job on this framework is a scheme to turn a rundown 1960s office block on Barking’s Cambridge Road called Crown House into a residential development of nearly 400 flats (pictured, below).

Designed by architect Carey Jones Chapman Tolcher, the existing building will be torn down and replaced with a scheme (pictured) of nine storeys and 29 storeys. Be First is developing the scheme alongside a private developer called Lightquote. 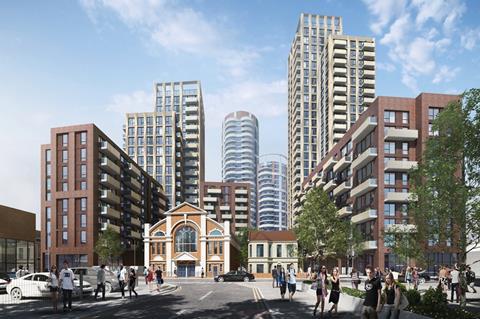