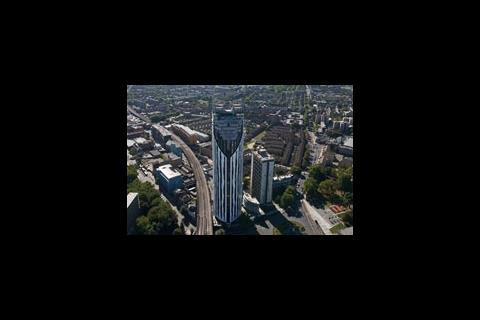 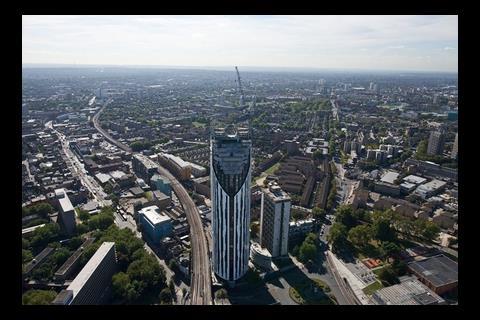 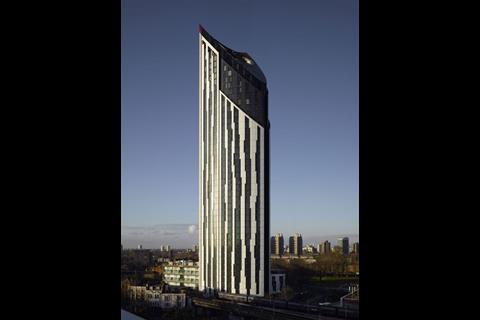 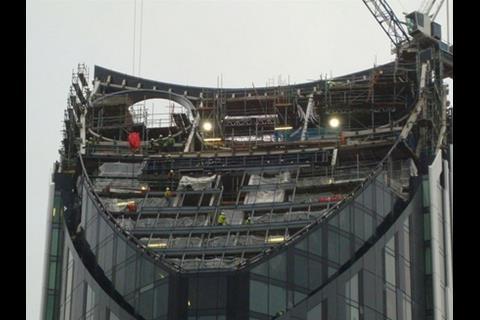 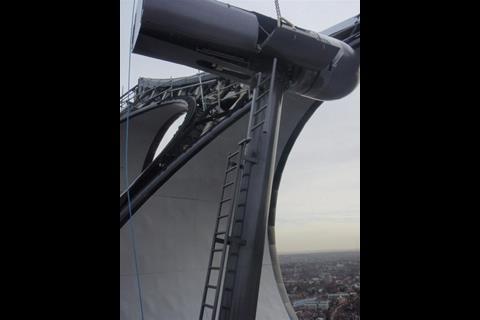 The turbines are located within three 9m diameter venturi tubes 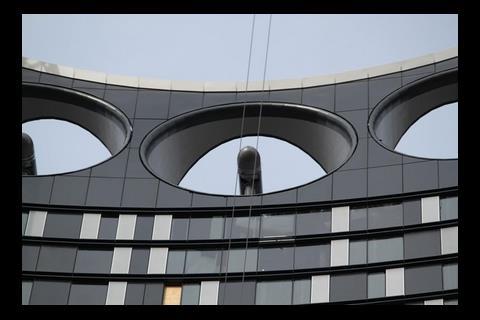 Building goes on site at London's tallest residential tower, nicknamed 'the razor', and finds out about the challenges created by its three integrated wind turbines

You’ve got hand it to Brookfield Europe. As the developer and main contractor behind Strata SE1, the 43-storey residential tower nearing completion in London’s Elephant and Castle, their timing was pretty good.

In 2007, just before the property crash it managed to sell all but four of the 310 privately owned properties straight off the plans. One of the four penthouse suites also fetched £2m, not bad for an area notorious for its concrete housing estates, traffic clogged roundabouts and an unfathomable underpass.

But this area of south London is set for a dramatic makeover. Strata SE1 is the first significant development to be delivered in the £1.5bn Elephant and Castle regeneration. Three sites were earmarked for tall buildings in the masterplan, and at 43 storeys and 147.9m Strata is the tallest.

It’s also the highest residential development in central London and will dominate the skyline on this side of the river until the Shard at London Bridge tops out.

The talking point of the building of course is the three wind turbines that cap the top. It’s claimed to be the only building in the world to integrate wind turbines into the fabric of the building and just last week the masts and nacelles were craned into position. All that awaits are the blades to be fitted before commissioning can begin.

Locals refer to the building as ‘the razor’, because the top resembles an electric razor. “We wanted a visual statement,” says Justin Black, project director at Brookfield, who describes it as ‘Marmite architecture’ – you either love it or hate it.

Approaching the tower you’re greeted by the vertical zebra stripe cladding but the building’s form was largely the result of the right for light requirements of adjacent buildings and the slenderness ratio, says Robbie Turner from architect Hamiltons.

“We didn’t want a squat looking building,” he adds. The scoop at top also has a functional role, preventing sun reflecting into the faces of oncoming train drivers on the rail tracks below.

One of the biggest challenges of this project is there was no benchmark, no one we could go and ask who had done it before

Urban wind turbines haven’t had great press in recent years, but the ones used on Strata are on an altogether different scale. For a start they’re 147m up in the air, where the prevailing wind conditions should satisfy the 8-16m/s speed required for optimal running.

“The technology is exactly the same as that used on the large scale wind farms,” says project director Matthew Hewitt. “Only scaled down to suit a building”. With 9m diameter blades, the turbines were made to special order for the building and are rated at 19kW each.

Brookfield says it took the decision to fully embrace renewable energy sources when the design of the building began back in 2005. All available technologies were considered during the initial planning period in a bid to meet the 10% on site renewable energy target set by the Greater London Authority.

Wind turbines were pursued as they offered the best potential to achieve results given the height and shape of the proposed building. The opportunity to incorporate them into the architecture and deliver a highly visible commitment to sustainable design added further validation.

“One of the biggest challenges of this project is there was no benchmark, no one we could go and ask who had done it before,” says Hewitt.

The turbines are located within three 9m diameter venturi tubes which form part of the facade. Constructing these was a particular challenge as the facade at this point is a complex three dimensional elipse.

The bulk of the building’s structural frame is concrete with post tensioned floor slabs used to reduce the slab thickness and also cut down on the cranage on the very constrained site. From floor 42 up however it switches to steel.

The cost of the turbines themselves is in the region on £1.3m, while building the complex venturis and cladding around the top of the building was considerably more

The tube itself is made out of 6mm thick sheet steel panels bolted to the steel support structure. The joints on this had to be spot as any distortion would effect the flow of air and could accentuate any noise and vibration. According to Hewitt a full scale mock-up was built on an airfield just outside of London where they practicsed assembling it as if they we already at the top of the tower.

Each turbine sits on an inertia base made out of concrete and steel and weighing around five tonnes which is supported on anti vibration mounts which prevents any vibration being transferred to the building’s structure.

Free-standing horizontal wind turbines generate their nominal power output at wind speeds of around 12m/s. On the Strata tower the venturis are able to capture lower wind speeds and accelerate them to increase the annual power output.

The big question is will they deliver. Brookfield is cautious, saying that the actual energy output of the turbines will only be accurately known after they are fully commissioned and two years of comprehensive wind data analysis has been completed. But they estimate that they will deliver around 50MWh of electricity a year. That’s around 8% of Strata’s estimated total electricity consumption - or equivalent to the demand of 30 two-bedroom apartments built to the 2006 Building Regulations.

Of course there is a price to pay in all this. The cost of the turbines themselves and the complex venturis and cladding around the top of the building cost in the region of £1.5m. However, the government’s announcement of feed-in tariffs in February was timely and could see the turbines generating an income of around £12,000 a year according to Damien Kenny, mechanical engineer with WSP on the project, which will help offset the annual maintenance of the turbines.

The wind turbines aren’t the only sustainable element of Strata SE1. The building exceeds the CO2 emissions requirements of the 2006 Part L by around 6% but this could shoot up to 73.5% if and when it is connected to the Elephant and Castle district heating and power network. “The entire building has been designed to simply plug into the MUSCo when it comes on line,” says Kenny.

Looking down from the 42 floor of Strata SE1 though this seems a long way off. The infamous Heygate estate, once home to 4,000 people, is still awaiting the bulldozers while work on re-routing the traffic clogged roads has yet to get underway. But Strata SE1 is a sign of what’s to come.