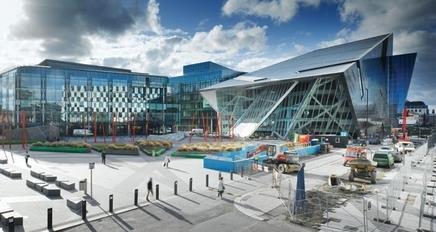 This is the Grand Canal Square theatre and commercial development, designed by star architect Daniel Libeskind. Situated in Dublin’s docklands, the £180m development has an area of just under 70,000m², including the 14,000m² theatre. The project is nearing completion.

The building is an iconic development in the Dublin area and is clearly identifiable as the work of Libeskind.

The use of metallic cladding, glass and a hint of colour provide an appealing and eclectic mix of materials.

The angled planes creates an ideal form for theatre and the structural frame and the landscaping surrounding the theatre have been developed in the same aesthetic, keeping a clear consistency and allowing the outside to flow inside, and the surrounding buildings to link together naturally.

The theatre responds to its context through its orientation which gives the glass atrium area clear panoramas across the square and harbour.

It’s the home of celebrity: Boyzone, Sinéad O’Connor - and now Daniel Liebskind. Dublin is the first Irish city to be blessed with one of his buildings, and its increasing civic prosperity will no doubt see an influx of more “starchitects” in the near future.

The scheme comprises a theatre core surrounded by various triangular amenities, including a considerable amount of office and retail space. Key to the building’s design was the setting up of a dialogue between the theatre as a cultural magnet and the surrounding public realm.

Outside of the building is a delicious red tongue stretching into the nearby canal. This playful addition gives the scheme all the presence of a A-list premier. It’s somewhat doubtful, therefore, that the scheme will be “integrated” into its surroundings “via two office blocks”, as the architect claims.

Like most of Liebskind’s work, this building has not been designed to blend into the background.

Jo Parsons is studying architecture at Nottingham Trent University.
Do you want to join the First Impressions panel? The email nargess.shahmanesh@ubm.com.
For the latest jobs in construction and top career tips visit Building4Jobs.