The developer Flan McNamara joined last year has submitted plans for its first major scheme in the UK.

McNamara left Sellar in December after eight years – where he was in charge of building Renzo Piano’s Shard – to join Vanguard Real Estate.

The firm is developing two sites in Belfast and Glasgow and McNamara, now a director at the London-based business, said the first £50m phase of a £400m regeneration project in east Belfast was now with city planners.

The first phase is the first of five office buildings planned for the Belfast Waterside site and McNamara said: “We are expecting planning approval in June and we would hope to start construction later this year.”

As well as the office buildings, the scheme includes 750 residential units and a 18,500sq m hotel.

Meanwhile, Vanguard is carrying out a series of public consultation events for its planned scheme in Glasgow ahead of submitting plans next month.

It is planning to build a 26,000sq m office block on the city’s Argyle Street which has been designed by local architect Cooper Cromar.

McNamara said: “We hope this office will attract major international occupiers to this fast developing area of the city.”

When complete, the development will be able to accommodate up to 4,000 people.

Read Building’s full interview with Flan McNamara in this week’s issue, in print and online - out Friday 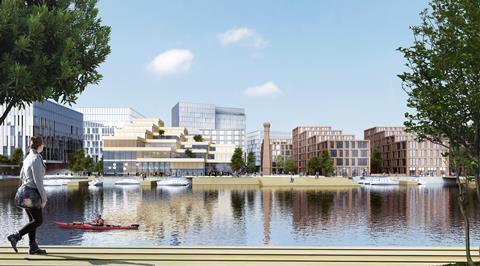 The scheme in Belfast will include five office buildings