The firm Shard builder Flan McNamara joined after eight years working for the late Irvine Sellar has landed its most high-profile job in the UK to date – a new technology building for banking giant Santander.

McNamara arrived at developer Vanguard Real Estate last December after working on the Shard and its 17-storey companion, the News Building, next door to London Bridge train station. He joined Sellar in 2009 after being in charge of Westfield’s giant shopping centre at White City in west London.

Vanguard has renamed its development business Osborne + Co with McNamara a director of the business along with father and son Jim – a former managing director of Tarmac International – and Conor Osborne.

Osborne + Co will now deliver the proposed £150m facility in Milton Keynes that will act as Santander’s UK technology hub and is due to open in 2022.

The firm is currently working with Santander to finalise designs for the new purpose-built campus which will create a workspace for around 5,000 people.

It is expected that a planning application for the new campus, which is being designed by LOM Architecture & Design, will be submitted early next year.

The Santander project is Osborne’s third major deal in the UK, with the company currently developing major office and mixed-use developments in Glasgow and Belfast as part of a real estate pipeline of around £1bn across the country.

Osborne is currently working on The Waterside, Belfast – a 1.7m ft2 mixed-use development. The first phase of the project, a £50m office building, was granted planning permission in August.

In Glasgow, plans are progressing for a 26,000sq m office on Argyle Street on a site that has been derelict for nearly two decades. 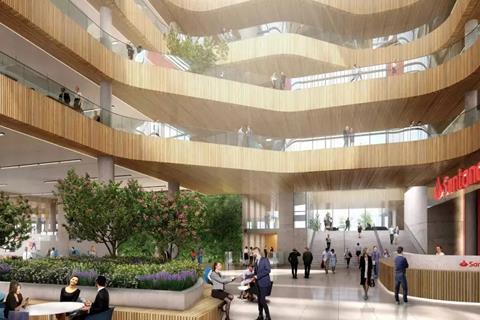 The new Santander building is due to be finished by 2022