Davis Langdon and Arup also working on Foster + Partners-designed project, which has had its budget balloon to $5bn 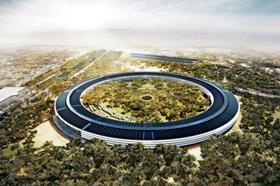 Bloomberg Business Week this week reported that the project’s budget has ballooned from less than $3bn (£1.96bn) to nearly $5bn (£3.3bn), according to five people close to the project who were not authorized to speak on the record.

It reports that the global tech giant is now working with architect Foster + Partners to reduce the cost of the scheme by $1bn before proceeding.

The scope of the project, called “Campus 2”, has also changed substantially from an initial plan for office space for 6,000 employees to a building that will accommodate up to 13,000.

Davis Langdon and Arup are also understood to be working on the project, with contractors Skanska USA and American firm DPR Construction appointed to build the scheme.

The circular building, which is nearly a mile in circumference, will provide both office and leisure facilities for Apple staff.

Facilities at the campus include a 1,000 seat auditorium, 300,000 square feet (28,000 m2) of R&D facilities, a fitness centre, an orchard, and a dedicated generating plant as primary source of electricity.