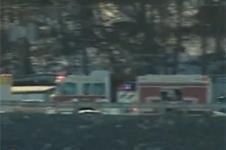 A gas explosion at a power plant under construction in the US state of Connecticut has killed at least five people and injured 12 others.

Around 200 people were working at the Kleen Energy plant in Middletown, which is due to open this summer. It was undergoing a series of gas tests when the explosion occurred.

According to Middletown mayor Sebastian Giuliano search experts and specialist dog teams are at the site combing through the wreckage.

The plant was undergoing a series of gas tests when the explosion occurred at 11.17 in the morning local time (16.17 GMT).

"How many people were here today - that's the number they can't really nail down. They were purging gas lines all night long, most people were evacuated from the building when they ran the tests," Giuliano said.

At least 100 firefighters were sent to the scene and it had taken them an hour to contain the fire caused by the blast.