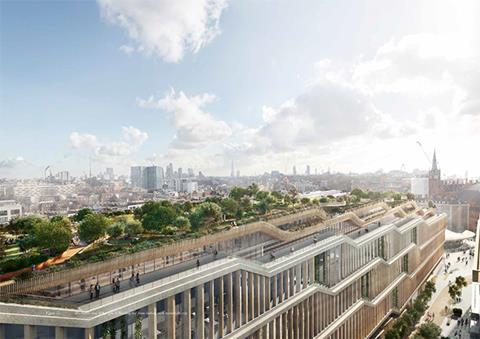 Google has won approval from planners at Camden council for its new £1bn headquarters at London’s King’s Cross.

The reserved matters application for the 80,819m2 building from US-Danish architect BIG and Heatherwick Studio follows outline planning approval in 2013 from Camden council for a previous scheme designed by AHMM.

Google’s director of real estate and construction Jo Borrett said: “We’re pleased that our new UK HQ has been approved by Camden and are excited to progress with the next phase of the development, through construction to occupation. The Knowledge Quarter in and around Kings Cross is an important centre for innovation and creativity; and we are proud to be able to call it home.”

BIG’s founding partner Bjarke Ingels said: “The unanimous planning approval of our first project in the UK is obviously great for us and our London office – but more importantly King’s Cross will get a very lively new neighbour and the UK Googlers will finally be united.“

And Thomas Heatherwick, founder of Heatherwick Studio, said: “Strong support for an ambitious building in an important part of the city is more proof that London is not afraid of its future. We’re excited to start building.”

The project will fill a one hectare hole at the southern end of developer Argent’s wider 27-hectare regeneration scheme, next to King’s Cross station.

Perched on a plinth punctuated by office entrances the “stepped” terrace-style building will be 11-storeys high, with up to 15 retail units at ground level along King’s Boulevard and accommodate 4,500 employees.

It will feature a three lane, 25m long pool, multi-use games area and gym on its upper floors and an 8,590m2 landscaped roof garden with a 200m “trim trail” – a running or walking track with exercise stations at regular intervals.

In addition the building will have an events space on the lower ground and first and second floors, which will be used by Google for product launches, talks, presentations and industry events.

Building revealed in January that the tech giant had appointed contractor Lendlease to build its new London HQ, which has an estimated construction cost of £350m. The wider project team includes BDP as the executive architect and structural engineer AKT II.

Planning officers at the council had recommended the scheme for approval and during the planning committee meeting last night said the proposed building was considered to be “refined and elegant with a strong cohesive palette of materials” and kept “a strong architectural character to make a positive contribution to the area”.

Members of the planning committee did raise questions on the aging process of the vertical wooden mullions – vertical bars between the panes of glass - and how the presentation of the building might end up changing over time, as well as the palette choice for cladding materials to be used on the ground level retail units. The options laid out included one gold-coloured material that one councillor called “rather garish”, prior to voting in to approve the application.

In addition, councillors asked if it would be possible to open up the roof garden to the local community more often than the specified once-a-year Open House programme in the capital and how much access would be given to the events space, which Google envisaged would also be used by technology-focused organisations and community groups or charities.

The planning officer said discussions were ongoing on both topics, but added that Google had a very busy programme planned for the events centre and security issues because of the open plan nature of the building were preventing the roof garden from being opened up to the public further.

Following the vote in favour of approving the planning application chair of the planning committee and councillor Heather Johnson called Google’s HQ “a very exciting building”.

Argent partner David Partridge said: “We are very pleased that Google’s UK HQ has been given the green light, and the team can now commence construction. Exceptional design and innovative engineering have created a fitting home for the Googlers who will enjoy the culture, leisure and public spaces that King’s Cross offers.”