Opponents of a controversial £300m mixed-use development in the centre of Norwich have called for a re-think after the government delayed a decision on whether the scheme should go ahead.

Housing secretary Robert Jenrick had been expected to rule on the Broadway Malyan scheme (pictured) last week after a four-week public inquiry at the start of the year but his department said the decision had been delayed, leaving the future of the Anglia Square project uncertain. 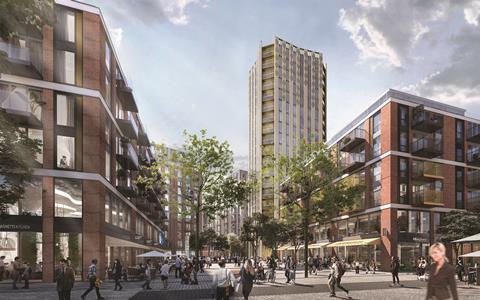 Groups including Historic England and Save Britain’s Heritage opposed the original scheme, saying the 20-storey tower and other large buildings proposed by Weston Homes and London-based Columbia Threadneedle Investments were likely to cause Norwich city centre “calamitous damage”.

Last year, the then communities secretary James Brokenshire called in the plans for a residential-led mixed-use scheme featuring 1,200 homes, a cinema, retail space and car parking.

Opponents of the original development have backed an alternative plan by architect Ash Sakula, put forward by Historic England. The revamped scheme would provide 595 homes built around traditional streets and low-rise terraces.

Broadway Malyan’s proposals, given the go-ahead by Norwich Council in December 2018, include nine blocks of up to 12 storeys, as well as the 20-storey tower.

Henrietta Billings, director of Save Britain’s Heritage, said: “Anglia Square could be transformed for the good with a lower-scale development that fits with the grain of Norwich as a magnificent historic city.

“The alternative scheme shows how this can be achieved. As we battle with covid-19, a 20-storey tower looks increasingly unsustainable as well as out of place in this location.”

The government has not given a reason for the delay to its decision.

An MHCLG spokesperson said: “The Anglia Square application remains under active consideration. A decision will be made in due course, it would not be appropriate to comment further at this stage.”