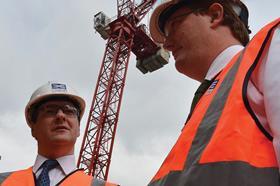 The government has delayed its announcement of a new form of PFI until after the summer recess, Building understands, casting doubt on its ability to kick-start construction projects, including the Priority Schools Building programme.

The news has taken the shine off a long-awaited announcement by chancellor George Osborne this week that the government will underwrite private investment on up to £40bn of nationally significant shovel-ready infrastructure projects.

This week’s announcement included a commitment to provide top-up loans for PFI schemes which aren’t able to get off the ground, but the government pulled a planned announcement on its end-to-end review of the PFI model.

Richard Threlfall, UK head of infrastructure, building and construction at KPMG, said: “It is my understanding that the son of PFI announcement has been delayed until the Autumn Statement.”

A separate source said: “We are unlikely to see anything this side of the Olympics now, and it will be disappointing if it is pushed back as far as the Autumn Statement.”

Sources had previously said the government was planning to make a statement on the direction of the review before this week’s recess, with Geoffrey Spence, chief executive of Infrastructure UK, telling the Government Construction Summit on 2 July it was “weeks away”.

The detail of how PFI-type deals will be structured in future is seen as the missing link in this week’s announcement of government guarantees for major infrastructure projects, which have been widely welcomed.

Rhian Kelly, director for business environment at theConfederation of British Industry, said: “PFI is vitally important on providing social infrastructure like schools. Today’s [Wednesday’s] announcement helps but we need to get more detail on the funding model that will deliver it.”

A guarantee scheme, UK Guarantees, is designed to underwrite private finance for stalled infrastructure projects. It will be administered by Treasury quango Infrastructure UK (IUK), with projects being asked to apply to IUK to take part.

The scheme, which will run initially until the end of 2012, will only underwrite “nationally significant projects” which meet a range of criteria (see box).

Guarantees will either be in the form of underwriting the construction risk on a project, or underwriting the risk of future revenue streams, with the Treasury estimating it could enable £40bn of construction projects in the existing pipeline to go ahead. The scheme requires primary legislation to proceed, but the government nevertheless expects the first guarantees to be in place by the autumn.

In addition a temporary lending programme for PPP projects will be available for 12 months in which the government will provide top-up loans on commercial terms to projects that lack funding.

A Treasury spokesperson said there are £6bn of PPP schemes in the pipeline for the next 12 months that could be helped by the programme.

Andrew Stevenson, director and head of infrastructure at Davis Langdon, said: “This is the sort of news that will encourage pension funds looking to invest in infrastructure projects. It’s a confidence boost.”

Alan Rubenstein, chief executive of the Pension Protection Fund, welcomed the announcement. “This should give investors, including pension funds, the confidence to provide the financial support that such projects need.”

Schemes in line to benefit:

The government won’t comment on which schemes will be the first to use UK Guarantees, but Building understands the Mersey Gateway, Thameslink Rolling Stock and A14 improvement projects are likely to be considered