Designed by architect Cullinan Studio, the National Automotive Innovation Campus, which is part-funded by the government, will focus on technologies to reduce the dependence of cars on fossil fuels and cut carbon emissions.

The 33,000sq m building will run across four floors and is being developed by Tata Motors, Jaguar Land Rover, which Tata owns, and Warwick Manufacturing Group, the engineering research arm of the university.

The centre, which was given the green light by Coventry council planners this week, has been designed to achieve a minimum BREEAM Excellent rating

The project was first announced by chancellor George Osborne at the 2012 Conservative Party conference.

Alongside Cullinan Studio, Rider Levett Bucknall is acting as project manager, Arup is the engineer and Buro Four is providing project management support.

Procurement of a contractor for the building is underway, with a start on site targeted for the fourth quarter this year.

The project is part of the university’s masterplan, approved by the local planning authority, to increase its estate by 170,000m2.

Peter Inglis, project director, Cullinan Studio, said: “The National Automotive Innovation Centre has been such an exciting project for us to design, so we were thrilled that Coventry City Council were enthusiastic about the new centre and the many benefits it will bring to the local economy.” 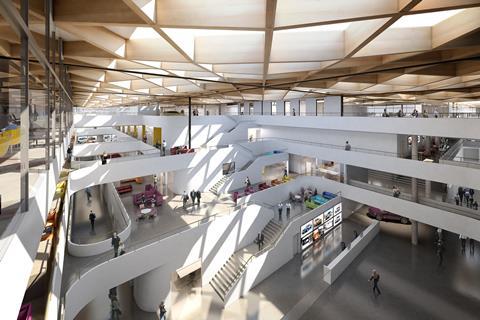