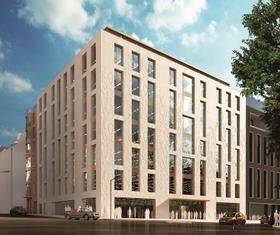 Developer Legal & General Property’s office and residential projects at Hanover Square and Wardour Street in London have been given the green light by Westminster council.

The council granted planning permission for the Make-designed seven-storey office scheme at 7-10 Hanover Square (pictured), where work will start in August after demolition is complete.

The 58,000 sq ft Portland stone-clad building will be built opposite the planned Bond Street Crossrail station and include ground floor retail space.

To the rear of the property on Princes Street a separate residential building is planned with five luxury two-bedroom apartments and a three-bed duplex penthouse.

Work is due to start on site in August 2014, with completion targeted for March 2017.

The project will provide 15 luxury flats and involve the alteration of the existing core, a replacement of the rear façade, and conversion and extension of seventh floor office accommodation into high spec residential.

Mace is the project manager, WSP Group the engineer, EC Harris is the cost consultant and Gerald Eve acted the planning consultant on both projects.