Rydon staff have been the sole focus of the Grenfell Tower Inquiry for the second successive week. Key witnesses were the main contractor’s refurbishment director Stephen Blake – who also stood in as the project’s contracts manager in its final months – and on-site “No 1” David Hughes, who was effectively project manager from October 2015. 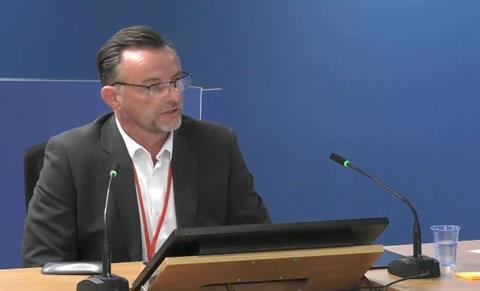 Probing the background to 2017’s fire at the high-rise block in west London, in which 72 lives were lost, inquiry barristers Kate Grange QC and Richard Millett QC paid particular attention to Rydon’s quality control oversight of its contractors on the project.

They also questioned witnesses on in-house expertise, their own product knowledge and contacts between the client team prior to its appointment.

On Monday, Grange asked Hughes whether concerns had been raised over the quality of work-checking at Grenfell. Hughes, whose responsibilities included managing the completion and handover of the cladding and communal M&E systems, said that they had not.

“I believed we had been quite thorough: making sure subcontractors were doing their work and giving me sheets telling me [they had] done it all,” he said.

Hughes said the firm’s subcontractors had a responsibility to make sure that their own work had been “correct in the first place” and that his own checks had not revealed any problems. “When I took building control and the clerk of works up there they only came back with very minor issues,” he added.

Hughes accepted that he had approved facades subcontractor Harley’s request to substitute the Celotex RS 5000 insulation specified for the project for Kingspan Kooltherm K15 without informing the client, Kensington & Chelsea Tenant Management Organisation, of the move.

Asked to explain why he had done this, even though he had been aware that it was a contractual condition of Rydon’s appointment to notify specification changes, he said that he could not.

Other contractually unauthorised product swaps on the project included substituting Kingspan TP10 infill panels between windows for a Styrofoam product.

Stephen Blake was Rydon’s refurbishment director at the time of the project and had a major role in the firm’s successful bid for it. Blake, who still works for the company as production director for Rydon Homes, also filled in as contracts manager on the Grenfell refurbishment after the original role holder Simon Lawrence left the firm.

Barrister Millett spent time questioning Blake about his contacts with client the Kensington & Chelsea Tenant Management Organisation prior to Rydon’s successful bid for the refurbishment project.

Grenfell Inquiry: Rydon was asked for ‘quick and dirty’ costing ahead of tower’s refurbishment

It emerged that consultants working for KCTMO had asked Blake for a “quick and dirty” check price for the project to help them firm up the procurement exercise months before it was formally launched in 2013.

Blake was also asked how much he knew about the TMO’s need to find an additional £800,000 of savings from Rydon’s £9.2m tender bid before the firm’s role on the project was finalised. In particular, Millett asked whether there had been a “secret understanding or arrangement” whereby reducing its bid price by that amount had been a condition for securing the job. Blake said there had been “no secret arrangement”.

On Tuesday, the inquiry heard that the three most senior Rydon managers directly responsible for Grenfell Tower were all newly promoted when KCTMO selected the firm for the project and that Grenfell was their first post-promotion role.

Blake filled in for Simon Lawrence after he left his role as contracts manager for the project in October 2015. Project manager Simon O’Connor had resigned weeks before.

On Wednesday, Blake was asked about Rydon’s decision to hold back the full savings figures expected to come from ditching the refurbishment’s originally proposed zinc cladding for an aluminium composite material (ACM) alternative.

Questioned about his motives, which could have been worth around £200,000 to Rydon depending on which product was eventually selected, Blake said: “Change in a contract environment is a way of creating margin for a contractor. And that’s what we’ve done here.”

Blake was asked many times about Rydon’s reliance on its subcontractors’ expertise to ensure that the products used for the refurbishment were safe and complied with building regulations, even though his firm had overall responsibility for the project.

His emotional final statement was an apparent recognition that there had been a lack of scrutiny in the design and approval process for the work at Grenfell.

“Hindsight is a gift that none of us have,” he said. “In the examination, it’s very clear that at a point in time when I believed the presentation and the acceptance of the windows and the cladding designs had been accepted to the satisfaction of the … through the design process and the submission and the exchange of building control … I believed this to be correct and it haunts me that it was never … that it wasn’t challenged because it was believed to be correct.”

On Wednesday, barrister Millett asked Blake whether it was normal for a principal contractor to proceed through the construction phase of a project like Grenfell without seeking specialist fire safety advice from a fire safety engineer. Blake said thet he expected such issues to be “flowed through the architectural development”.

KCTMO hired fire safety specialist Exova to work on the project in 2012 and the firm produced an outline fire safety strategy for the refurbishment in 2013 – however the firm was not novated once Rydon was appointed in 2014 and the strategy was not updated as the project progressed. Exova continued to answer questions from project team members on an “ad-hoc basis”, the inquiry heard.

On Thursday, former Grenfell Tower site managers Gary Martin and Daniel Osgood gave evidence about their experiences on the project. Both said they had essentially assumed that combustible insulation used to fill space around the refurbished block’s windows had been either fire resistant or fireproof.

Martin told the session that he had understood the foil-backed insulation material inserted between Grenfell’s original window surrounds and its new UPVC windows – fitted in line with the building’s new cladding system – had been ”some kind of fire-delay and smoke-deterrent”.

Osgood said he had been under the impression “everything had to be 100% fireproof or it couldn’t go on”. He said he would have expected someone at Rydon to made sure the materials used did not breach the fire compartmentation of each flat in the building.

The combustible insulation materials used behind the ACM cladding and to fill gaps in the window areas were identified in the inquiry’s phase one report as having “contributed to the rate and extent of vertical flame spread” on the night fire broke out.

The inquiry is pausing its hearings for a summer break next month, resuming in September.