Grenfell Inquiry: Who did what?

Evidence submitted in phase two of the Grenfell Tower inquiry has painted a damning picture of a refurbishment project in which none of the main players had anything close to a grip on fire safety issues, each blaming the others for the scheme’s manifest failure to meet building regulations.

Phase two of the inquiry, geared to determine responsibility for the design and delivery of the ill-fated 2014 refurbishment which clad the tower in flammable plastic insulation, started in the last week of January but has been delayed by employees from the major players making the surprise move to request assurances that evidence given to the trial would not be used in future criminal prosecutions.

But who did what on the Grenfell Tower refurbishment and how are the parties related to one another? The Building team has laid out the relationships and responsibilities of the key parties involved. 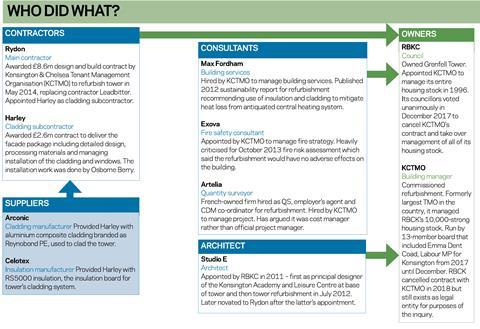