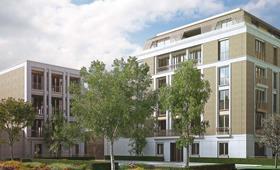 Google headquarters bidders Lendlease, Multiplex and Sir Robert McAlpine are squaring up to each other for another high-profile scheme in the capital – a deal to turn a former army barracks in St John’s Wood into luxury homes, Building can reveal.

The site in north-west London served as the headquarters for the Royal Horse Artillery, the troop whose responsibilities include firing royal salutes in central London.

But in 2012, the troop moved to a new home across the capital in Woolwich, ending more than 200 years of military connections, and the site sold to Malaysian businessman Ananda Krinshnan’s Usaha Tegas Group for £250m.

Krinshan, who made his estimated $6.5bn fortune in oil, gaming and property, brought in architects Squire & Partners, the practice behind the Shell Centre redevelopment on the South Bank, and Wilkinson Eyre to turn the site into luxury flats.

The site’s grade II listed riding school will be turned into a spa, swimming pool and gym.

Westminster council gave the scheme, which has an estimated development value of £1.5bn according to Barbour ABI, planning back in 2014 for 163 apartments and houses but this has now been increased by eight – while a series of villas has been reduced in number. The site will also include retail along with 59 affordable homes and a further 41 off-site.

The latest plans will be submitted to the council later this month with a decision due early in the new year.

Building understands the three contractors will shortly be reduced to two with a winner from the final pair set to be announced in the next few weeks.

Along with Mace, the trio are all bidding the £650m scheme to build a new headquarters building for tech giant Google with a winner on this scheme due later this month.