Help to Buy loans have been used on more than 20% of new-build sales across the capital since 2013, analysis published this week has revealed. 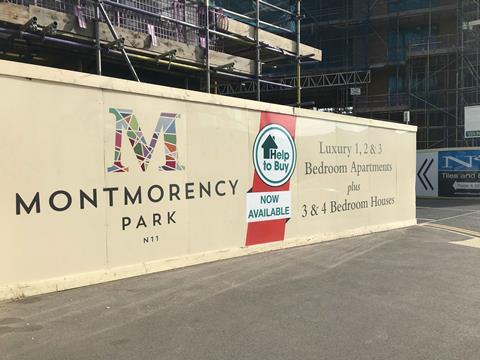 But the research, which was carried out by the fintech firm Proportunity, said more needed to be done by the next government to boost homeownership in the centre of the capital, since the scheme has helped more buyers in outer London than those in inner boroughs.

>> Analysis: Life after Help to Buy

Proportunity looked at the proportion of new builds in each borough that were sold with a Help to Buy loan between the scheme’s introduction in April 2013 and the first quarter of 2019, when the data was last available.

Barking and Dagenham in east London topped the rankings, with 61.7% of new-build homes sold using the scheme. Waltham Forest, with 51.7%, was the only other borough to break the 50% mark. Sutton, Havering and Redbridge also ranked in the top five.

Across the capital, the scheme supported 22% of new-build sales. If properties that cost more than £600,000 – the government threshold – were excluded from the calculation, this figure rose to 29.7%.

Proportunity also looked at Help to Buy as a proportion of total sales and transactions since 2013, not just new builds, and found the scheme made up a much smaller proportion – only 2.6% of total London sales.

The boroughs where it contributed the largest proportion of all sales included Barking and Dagenham with 5.2%, Greenwich at 4.6% and Barnet with 4.6%.

The research showed that 84.2% of all Help to Buy loans since the programme’s launch had been used on flats.

Help to Buy was introduced by the coalition government in 2013 to help boost housebuilding and homeownership. But despite extending the scheme after their general election victory in 2015, the Conservatives have said they plan to wind it down by 2023.