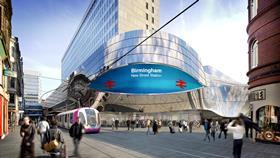 The Yorkshire-based firm, which is working on the on £600m redevelopment of Birmingham New Street station (pictured), was founded in 1987 by chair John Duffy and works across the highways, defence, rail, residential, renewals, and power sectors.

BDO said collectively the companies employ approximately 300 staff based at the above locations, but no redundancies have been made at this stage.

Paul Bates, BDO business restructuring partner, said: “The companies encountered financial difficulties as a result of the challenging economic climate over the past few years. Turnover has fallen from about £62m in 2009 to about £42m in 2012. Regrettably, this has meant that the companies are unable to continue to trade in their current form.

Among the jobs that Hewlett were working on is the £600m redevelopment of Birmingham New Street station for Network Rail, where it was delivering street works.

A spokesperson for Network Rail said: “Network Rail and Mace are currently drawing up contingency plans to allow the work to be delivered by other means and for members of staff to be redeployed where possible. We’re confident this situation will not delay the delivery of the project and we remain on course to switch the first half of the station over as scheduled this April.”

Emma Miller, director at credit firm Top Service, said the administration was “no surprise”. “We had quite an influx of people reporting problems with Hewlett towards the end of last year,” she said.

She said Top Service’s debt recovery team had dealt with over £100,000 worth of overdue accounts in recent months.

According to Top Service the firm has four outstanding county court judgments against it totalling £48,815, including one, handed down last Wednesday, for £47,481.