High speed rail plans to be published in March 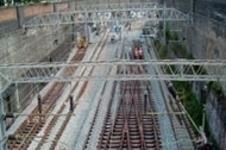 Plans to build a comprehensive high speed rail network in the UK, including timescales and finances, will be announced next spring, said transport secretary Andrew Adonis today.

A white paper will be published by March 2010 if the government decides to pursue proposals put forward by their advisers, High Speed Two.

The first north-south route will be London to the West Midlands and options for routes further north, including the North West, the East Midlands, Yorkshire, the North East and Scotland, are being explored.

A full public consultation would then start in autumn 2010 before the plans are finalised.