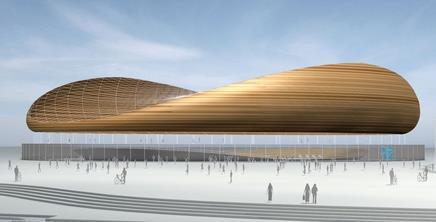 Hopkins Architects has won the race to design the Olympic velopark, likely to be the last major design-led venue procured for the 2012 Games.

David Higgins, the Olympic Delivery Authority (ODA) chief executive, said the Hopkins team had understood the need to link the Games and the legacy. “Their vision supported our desire for a velodrome that sits within a comprehensive velopark with a range of cycling facilities for people of all abilities,” he said.

The velopark is due for completion in the summer of 2011 and will include a 6000-seat velodrome and a BMX circuit. After the Games, the BMX circuit will be moved next to the velodrome. A road cycle circuit and a mountain bike course will be added, and these will link into cycle routes across London.

A contractor has yet to be appointed, but is expected to be announced in March.

The news comes at a time when Olympic organisers are introducing a number of measures to control costs. This week:

Meanwhile, a Public Accounts Committee report has warned that the 2012 Olympics must be managed with an “iron hand” to prevent contractors holding it to ransom. The committee’s report warned that standards would drop and contractors would need to be paid more if the delivery timetable was not adhered to.

For more on the Olympics, go to www.building.co.uk/archive