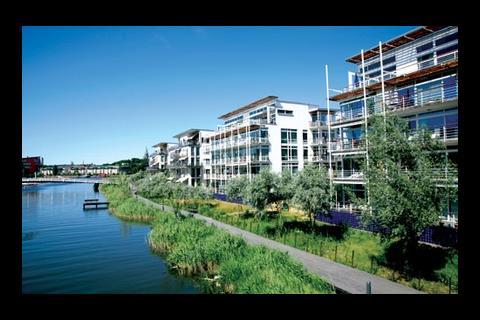 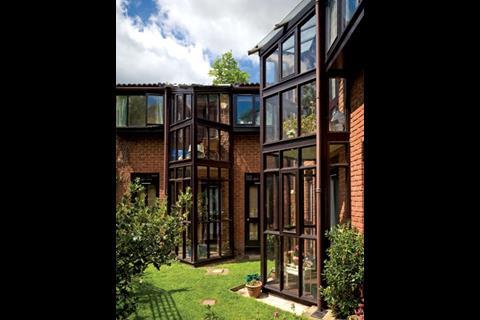 Fuel costs being what they are, housing design must make the most of sunlight to heat houses. Peter Caplehorn of Scott Brownrigg explains how to arrive at an integrated solution

These days designers ignore solar gain at their peril. The low winter sun provides a significant amount of energy, cuts down on space heating and provides a means of creating a winter garden, or even just a space to dry washing. However, in the summer months the home can become a solar oven, and may require air-conditioning. There are a number of ways designers can address these issue, but it is a balancing act that needs careful consideration from the outset.

1. Look at orientation and thermal mass

The use of mass is fundamental to the building’s energy performance. Strangely, it has been long ignored but using an insulated mass – such as brick or concrete – to act as a thermal flywheel is really just common sense. This is evident in older buildings – think of a cathedral – and it makes them more comfortable in extremes of hot and cold. To build in thermal mass and optimise the orientation of the building you have to start from the beginning of the design process. If you adopt this approach, you have to control direct solar gain on to the building’s fabric and indirect gain through the openings.

2. Making use of the heat

One way to make use of solar gain is by incorporating a winter garden into the design. This is typically a glazed full-height space on the south-facing elevation that can be shut off from the main house. It captures solar gains during the winter months and provides a warm space and a buffer zone between the primary building envelope and the main living areas. In the summer months the doors between the winter garden and the home can be closed and the space ventilated – typically by louvres at the top and bottom of the facade – to prevent heat build up. There are costs associated with this approach but it is encouraged under the Code for Sustainable Homes.

Another approach is a Trombe Wall. In its modern incarnation this is a panel of insulated glazing separated from a wall with a high thermal mass, such as brick, by an air gap. During the day the sun warms the surface of the wall and the glazing helps this heat to be retained; at night it flows into the house interior. It can also be used to heat incoming air to the house. In the summer months the air gap can be ventilated to prevent excessive heat from building up.

Ensuring that windows and doors are efficient has been part of the regulatory arena for some time. However, they still could be improved by ensuring that the thermal and air seals are of high performance and that there is no fall off in thermal performance at the junction between the frame and the adjacent wall.

Triple-glazed units, windows with argon-filled cavities (although the benefits of this can be short lived as the argon often leaks out within eight years or so) and low emissivity glass coatings that reflect a large percentage of the solar gain are now easy to specify and would not normally be subject to planning, but of course is subject to building control approval through the Fensa scheme. This recognises the energy flow through a window over a year and therefore has a built-in assessment of gain and loss.

External shading and shutters can be added to nearly any building and are an effective and simple solution. These are normally subject to planning consent, but as their prime objective is to conserve energy and reduce carbon footprints, they are looked on with enthusiasm by planning authorities. They have been used in warmer climates for centuries; soon they could become part of the UK vernacular.

On new projects, a significant roof overhang can provide good shading to upper storey rooms. This is a simple feature but effective at fending off peak summer sunshine.

Insulating shutters should work in conjunction with high-mass construction. Most domestic systems on the market are decorative or designed for security, however simple and thermally effective shutters can be designed and constructed very easily and do both jobs. They should be designed with double hinges that allow most cleaning and repair to be done from the adjoining window.

Brises-soleil can also be used and can take many forms, including decorative roofs or balconies that add character to the building.

Loggia and pergolas can be very effective at creating a cool intermediate transitional space between the building facade and the exterior. This is particularly the case if they are used to support climbing plants; however simply ensuring that the building has the benefit of plants such as trees can help with the solar gain, and the layout of the garden should be considered as part of the overall design.