According to the latest PMI data, the sector was the weakest performing area of construction activity for the fourth month running, with an index reading of 49.3 – meaning the sector actually contracted last month.

Across the board, the index, published by S&P and CIPS, showed a loss of momentum for the industry, with activity expanding at the weakest pace for nine months. The index figure for June was 52.6, down from 56.4 the month prior. 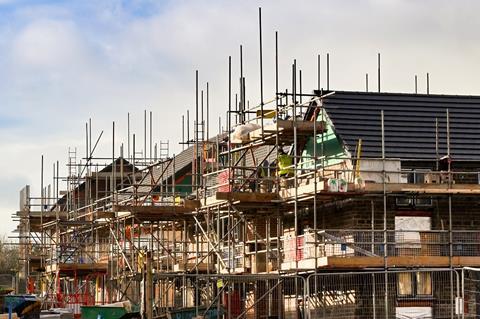 New orders increased to the smallest extent since last October, while growth projections are now the least upbeat since July 2020.

Tim Moore, economics director at S&P Global, said “the gloomy UK business outlook and worsening consumer demand due to the cost-of-living crisis” had combined to “put the brakes on construction growth in June”.

And Duncan Brock, group director at the Chartered Institute of Procurement and Supply, said the slowdown was “in glaring contrast to the pandemic years”, when construction “held up well compared to other sectors”.

He added: “The heightened competition faced for short supply raw materials as well as essential skills for the building trade is squeezing the optimism out of builders with the lowest business expectations since July 2020.

“Returning from pandemic lockdowns has not been easy as builders now face greater affordability challenges not just for staff wages but for the energy-intensive materials needed to deliver the pipelines of construction work they currently have.” 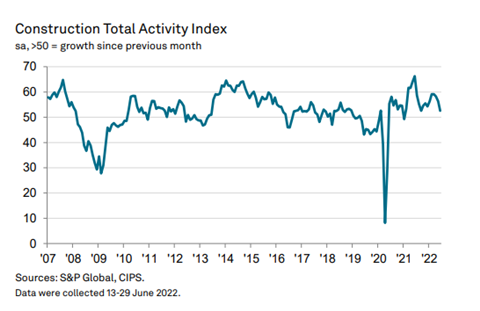 There have been reports of inflation higher than 20% for certain construction materials and around 71% respondents to the S&P/CIPS survey said they had seen price rises in June. The survey also reported lengthening supplier delivery times.

“With a downbeat economic environment, the sector will be fearful about what is round the corner during the rest of this year,” said Brock.

Despite the concerns about future work, June saw a robust rise in staffing numbers, though survey respondents commented on shortages of candidates to fill vacancies, despite reportedly offering high wages.

According to Max Jones, director of Lloyds’ infrastructure and construction team, firms are looking to non-financial perks to recruit, with the labour pool “running dry”.

Civil engineering was the most resilient sector last month, down just 1.2 index points on May, which was attributed to long-term infrastructure projects.

Earlier this week, Glenigan published its latest construction sector forecast, which predicted that overall project starts would slip back 2% because of market disruptions.

Private housing, retail and leisure were cited as being particularly effected, while a strong pipeline of work for industrial and office building was expected to lift both of these sectors.

The housebuilding slowdown reported in the Construction PMI data was echoed by Glenigan, which predicted a 5% drop in project starts in the sector.

This was attributed to the removal of temporary Stamp Duty relief and dwindling homebuyer confidence, higher taxes and mortgage costs.

The information provider expects a return to growth in 2023 as the economy stabilises and short-term supply chain pressures ease.