The CPA/Barbour ABI private housing index shows a subdued private housing market over the next few months. In mid-2009 the market seemed to be starting to recover. Prices started to increase and banks resumed lending, giving buyers the confidence they needed. In response, housebuilders stepped up activity from the historically low level reached in 2009. Fast-forward to early 2011 and the impetus driving the recovery has petered out. This is reflected in the CPA/Barbour ABI index, a leading indicator of work for housebuilders, which fell by 7% year-on-year in January and the rate of decline accelerated to 14% in February, after rising in 2010.

So what is going wrong? Affordability remains poor and mortgage lending criteria stringent. The average deposit paid by first-time buyers was £32,000 in 2010, 35% higher than average income. New homeowners will spend between 10% and 15% of their income on interest payments, according to the Council of Mortgage Lenders. Home ownership is a big commitment and in a market where the cost of borrowing is certain to rise, negative equity is a possibility, and a quick sale far from guaranteed, confidence about the health of the economy is key.

A combination of strong and rising inflation, modest wage settlements and unemployment, even before public sector spending cuts have an impact, is starting to take its toll. In January, the GfK NOP Consumer Confidence Index fell at the fastest pace since December 1994, to its lowest since March 2009.

A fall in the private housing index in early 2011 is concerning and suggests that the recovery in 2010 could be derailed. Household finances have suffered due to materials costs rising and VAT increasing, yet as the year goes on and after inflation peaks, pressure is likely to ease and confidence could strengthen.

Kelly Forrest is a senior economist at the CPA 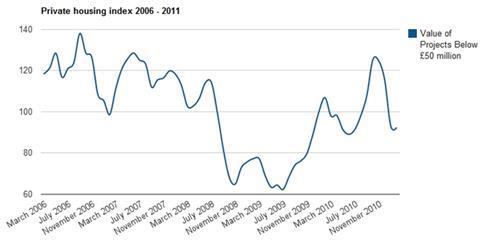