Structures will be built by Derbyshire firm Stanton

HS2 has unveiled images of a 1.5 mile long tunnel that will be built offsite at a factory in Derbyshire.

The Greatworth tunnel in Northamptonshire will consist of 5,400 steel reinforced segments and will be made by Stanton Precast at its Ilkeston plant. 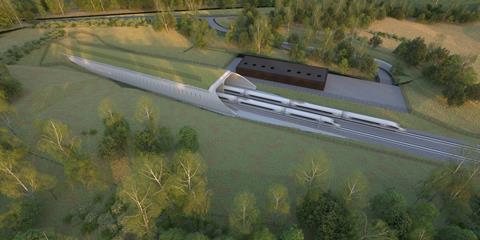 Stanton will also build similar structures near Wendover in Buckinghamshire and Chipping Warden in Northamptonshire, stretching for a combined total of four miles.

The number of segments it will make for all three tunnels will top 13,000 with the firm bringing in around 90 extra staff to take its workforce up to 180. New production sheds, casting and storage areas are also being built at the factory to handle the new work.

The Greatworth tunnel will be shipped to site and assembled over the railway line as it passes the village, which is to the east of Banbury. It will then be covered with earth and landscaped to fit into the surrounding countryside.

HS2 said the lighter weight modular approach is expected to more than halve the amount of carbon embedded in the structure. 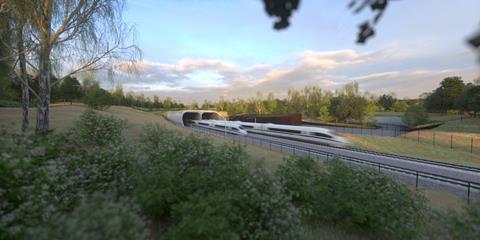 The Greatworth tunnel will consist of more than 5,000 segments

Designed as an ‘m’ shaped double arch, the tunnel will have two separate halves for southbound and northbound trains. Instead of the whole tunnel being cast on site, five different concrete precast segments will be slotted together to achieve the double arch – one central pier, two side walls and two roof slabs.

Main contractor on the scheme is a team made up of French firm Eiffage, Kier, Spanish contractor Ferrovial and Bam Nuttall.