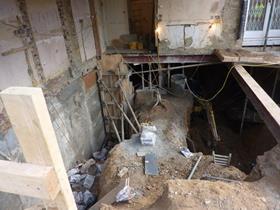 The Health and Safety Executive (HSE) has warned builders in two exclusive London boroughs that it is launching an inspection drive on basement builds.

It said the two-day crackdown would run next week and focus on projects in Hammersmith and Fulham and Kensington and Chelsea.

The HSE said 17 workers had died in recent years and a further 27 had been seriously injured because of accidents involving basement builds.

HSE construction inspector James Hickman said basement builds were increasingly widespread in the capital, and often carried out under existing homes as owners sought to increase their living space without a house move.

He said the executive had evidence that some contractors cut corners on propping and worker safety.

“The work is technically challenging and can carry substantial risk. Standards are often poor and often vulnerable sections of the labour market are recruited,” he said.

“Contractors are failing to appoint a competent temporary works engineer to design suitable propping to support excavations and existing structures.

“Likewise, on many projects basic safeguards are missing, such as edge protection to prevent falls from height. And all too often little thought is given to providing proper welfare facilities for site workers.

“Where we find poor practice that is putting lives at risk we will take action, including stopping work and prosecuting those responsible.”