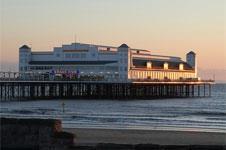 Six fire engines are battling a huge blaze at the recently refurbished pier in Weston-super-Mare, Somerset.

The fire broke out at the grade II listed structure early this morning. Witnesses say that the flames, which are being tackled by 30 firefighters, can be seen as far away as Bristol and Cardiff.

Dee Williams, deputy manager of the nearby Grand Atlantic Hotel, told the BBC: “It is an inferno. There will be no pier by tonight.”

Opened in 1904, the Grand Pier at Weston-super-Mare was one of the last of the great seaside piers to undergo construction in the UK. It was refurbished in April this year as part of the town's regeneration, which also involves an Urban Splash scheme to regenerate the town's nearby Birnbeck Pier.