Council will start to look for contractors from early next year

Hull City Council has unveiled plans for a £130m mixed-use development in its town centre.

The Albion Square development will include a new ice arena, 278 residential units and 10 retail units covering 16,750m2. It will also have 832m2 of office space, a 612-space multi-storey car park and a new public square.

The council will seek bidders on the first design and build contract from early next year, with the winning contractor set to pick up between £50m-£100m depending on how many phases the council opts to develop the site in.

The city council has owned the 2.2ha Albion Square since last year when it splashed £2.8m on the Edwin Davis and Co-op buildings which previously occupied the plot.

The winning contractor will also be responsible for transplanting a glass mosaic – which the council believes to be Britain’s largest – which currently adorns the Co-op building, onto the front of the new development.

The mural depicts three fishing trawlers and has been on site since 1963 when it was commissioned by the Co-operative Society.

The proposed redevelopment of the Co-op building sparked a backlash from locals concerned about the fate of the mural, with the Hull Heritage Action Group launching a petition to give it grade II listed status.

The council has incorporated the piece into the Albion Square design, but it remains uncertain whether the original mosaic can be transferred.

Hull County Council’s city manager for major projects and infrastructure, Garry Taylor, said: “Its a really special piece and we desperately want to keep it if we can.

“We don’t know as yet if moving it will be possible, but its certainly an iconic piece and very important to people of Hull,” he added. 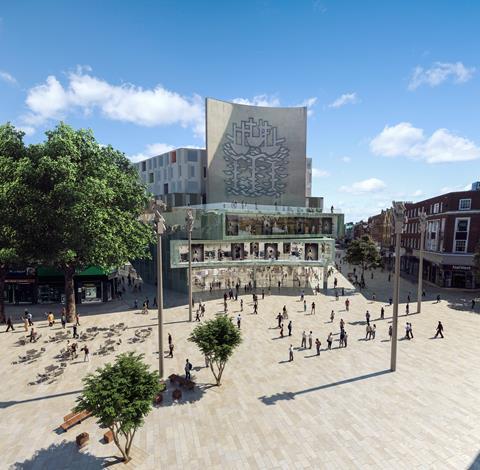