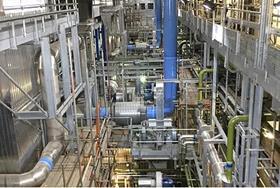 Problems with smells, noises and toxic fumes are among hundreds of complaints which have helped to hold up handover of Interserve’s energy-from-waste scheme in Derby, documents obtained by Building have revealed.

Interserve is in a 50:50 joint venture with waste management firm Renewi to carry out work on the £145m scheme at Sinfin.

The JV, called Resource Recovery Solutions (RRS), had originally been due to finish the scheme for Derby city council and Derbyshire county council in spring 2017 after signing up to the deal back in 2009.

The job is one of a number in the contractor’s disastrous portfolio of energy-from-waste schemes which have racked up crippling losses and caused it to seek a second rescue in less than a year.

The plant (pictured), which has been built next door to a Rolls Royce factory, began taking in waste last January but has been hit with a string of complaints from local residents since.

According to data released by the Environment Agency under a Freedom of Information request, 259 complaints were made in its first year of operation.

Last September, one local resident, Paul Rogers, told the Derby Telegraph: “It stinks really bad and smells like overflowing bins.” He added: “The noise is like a humming sound, it just cuts through everything.”

The vast majority of complaints, 204, were made about smells with a further 31 being made about noise and vibration. Other complaints included issues over smoke, vermin, toxic fumes and dust.

One incident over odour was caused by a seized damper valve – which stops or regulates the flow of air inside a duct – while an unsealed chamber at the plant caused an acidic odour to be released.

The documents also reveal the plant had issues with the software on one of its three processing lines that were causing a “string of electrostatic discharges”. RRS was forced to shut the line to investigate the issue.

In a statement, RSS confirmed no firm date for handover has yet been inked in and added: “We continue to work constructively with the councils and all other project stakeholders to bring the Derby Waste Treatment Centre into full service.”

Minutes of a Community Liaison Group meeting on 13 December, which was attended by representatives from Interserve, Renewi and the councils, said the opening date was dependent on the next phase of testing, which was due to start in the middle of last month.

The minutes said: “The IC [independent certifier] needs time to review both tests and make a decision. A date cannot be issued at this stage.”

The EA also revealed that RSS had breached its permit six times in 2018.

The news comes as the firm prepares to release an updated rescue plan later this week. Interserve’s problems with energy-from-waste have so far cost it more than £220m.

Additional reporting by Will Ing