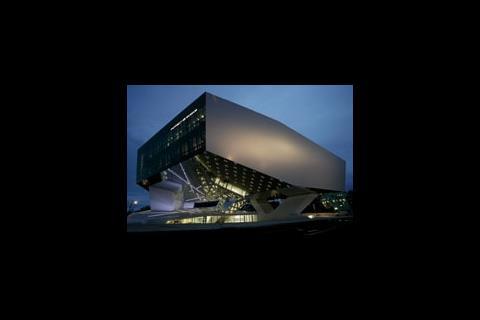 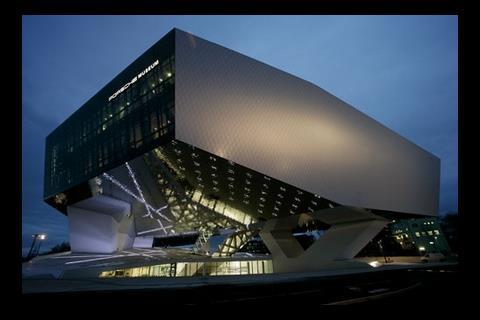 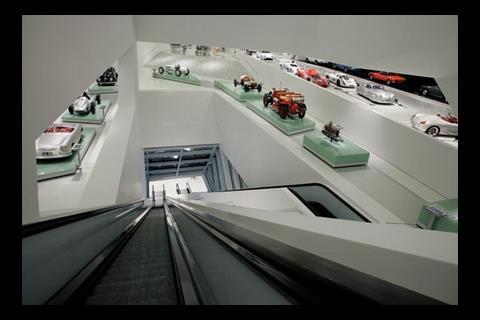 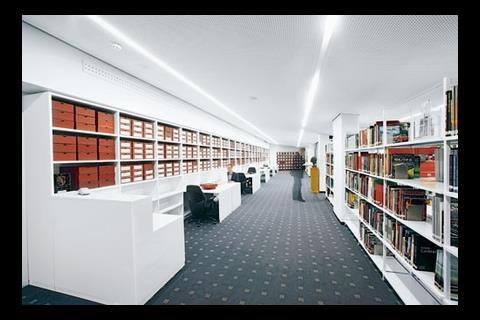 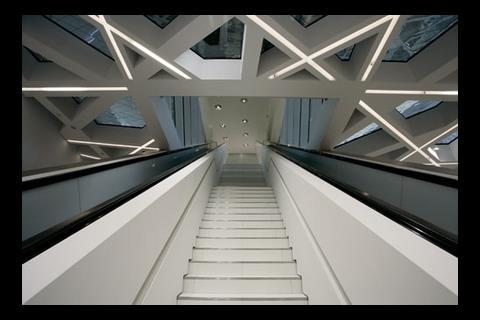 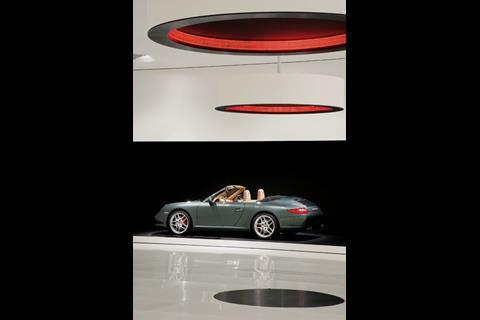 This is the new Porsche Museum which will open its doors to the public on 31 January.

Designed by Viennese architect Delugan Meissl, it is located in the suburb of Zuffenhausen, home to the sportscar maker for over 50 years.

The foyer with a view into the restaurant Boxenstopp (left)

The museum is close to the UN Studio-designed Mercedes-Benz Museum, which was completed two years ago.

Around 80 cars are on display in the 5,600m² exhibition space, ranging from the legendary wheel hub motor of the Lohner-Porsche, the world’s first hybrid automobile built in 1900, to the latest generation of its most successful model, the Porsche 911.

Roman Delugan, architect at the firm, said: “Architecture should not just be seen as another building, but should have an effect on the mind and body of human beings.

“This museum should make the Porsche cosmos a palpable reality for each person.”

The building is designed entirely in white with its exhibition area resting on only three single supports so as to appear to be hovering.

Dr Wendelin Wiedeking, chair of the board at Porsche, said: “While the bold architecture of the building reflects the individuality, self-confidence, and orientation towards the future of Porsche itself, the exhibition with the turn-key sportscars from the Museum on Wheels, which are always ready to spring into action, breathes plenty of life into the company's history.”

The exhibition concept was developed by local architect HG Merz. The firm deliberately dispensed with the idea of a staged theme world with show effects and instead let the sportscars speak for themselves.

Type 64, the ancestor of all Porsche sports cars (Berlin-Rome car)

“In Zuffenhausen they stand like sculptures in a white gallery. Against these reduced surroundings, the visitor can be alone with the vehicles and with his or her own personal feelings.”