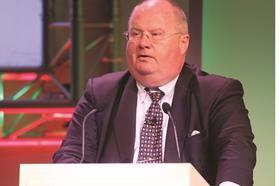 Eric Pickles has launched a government push to promote off-site manufactured houses as the solution to the current housing crisis, despite serious doubts from parts of the housing industry.

The communities secretary (pictured) used his keynote speech at the annual Alan Cherry debate, organised by Building, to say the government would support and promote the use of prefabricated housing to help speed up the construction of new homes.

He said: “Off-site is a key technology in achieving affordable homes. In the capital where plots can be small or oddly shaped, off-site construction can be the perfect solution.”

But speaking at the same event Ben Derbyshire, managing partner at architect HTA, said he was “astonished” that Pickles held it as the answer to the housing crisis.