Technology used to build the world’s largest McDonald’s is being adapted to build temporary, highly flexible, 100% recyclable housing in Holland. Could the model be brought here to solve the UK’s affordable housing crisis?

Britain’s housing crisis is one of the biggest social and economic challenges facing the country at the start of the 21st century. According to government figures 122,590 new homes were built in England last year, a rise of almost 25% on the previous year. But this is still well below the 300,000 figure some, including the RIBA, have estimated will need to be built every year in order to avoid a national shortfall of 2 million homes by 2020. Britain hasn’t built 300,000 homes a year since the post-war years of the Macmillan Tory government of the fifties.

The effects of this shortfall are clear to see particularly, though not exclusively, in London. High house prices, spiralling rents, constricted supply and accelerating personal debt are just some of the negative consequences and many of these problems are most acutely felt in the affordable housing sector. Homelessness charity Centrepoint estimates that England will need to build almost 1 million affordable homes over the next seven years to avoid the situation reaching crisis point. However just 42,830 were built last year, an annual decrease of 26% from 2012.

The obvious solution to this crisis is to build more homes. But this is costly, time-consuming and, as witnessed by the fierce ongoing debates over greenbelt land in rural areas and high-rise residential development in London, intensely controversial. But specialist Dutch event structures manufacturer Neptunus thinks it may have found a solution. And that solution, bizarrely, began at a McDonald’s restaurant in east London.

During the London 2012 Olympics, the largest McDonald’s in the world was built in London’s Queen Elizabeth Olympic Park. But apart from its prodigious size, (3,000ft², 1,500 seats and two-storeys) the most interesting aspect of this building was its temporary nature. It was in operation for only two months before the entire structure was dismantled at the end of the Games.

But while the restaurant may be no more, the technology used to build it has now been adapted and applied to a different typology of building: housing. Earlier this month a new housing block, Irenehof, opened in Limburg in the Netherlands providing 16 30m² one-bed and four 60m² two-bed apartments. 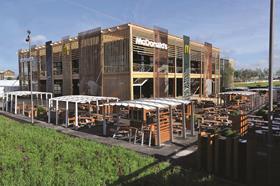 Developed and built by Neptunus as a joint venture between the local authority and housing association, it is designed to provide short-term emergency accommodation for immigrants, young people unable to mount the housing ladder or others in desperate domestic circumstances. Residents can stay for a maximum of two years.

Irenehof is based on a radical new temporary housing concept that provides housing in fully recyclable, semi-permanent buildings that can last from any number of months up to 20 years. With its speed of construction, (Irenehof took just 16 weeks to build), 100% recyclability, flexibility and capacity for full relocation and reassembly, Neptunus is pitching this revolutionary concept as a possible solution to the affordable housing crisis in both Holland and the UK.

Temporary buildings come with no small degree of stigma and many might commonly associate the term with structures like Portakabins, marquees and tents. The latter two are in fact what Neptunus has specialised in for the past 77 years since company founder Anton Eilers discovered a collapsed military tent inside a chest bearing Neptune’s trident that he had found mysteriously washed up on a Dutch beach.

Neptunus has since gone on to become a leader in temporary event construction, inventing the world’s first double and then triple-decker tents. It also has extensive UK experience with a base in Northampton and a portfolio of previous UK projects that includes the Chelsea Flower Show, the Farnborough Air Show and Royal Ascot as well as the London 2012 McDonald’s.

However, despite these temporary construction origins, Irenehof is aesthetically almost indistinguishable from a permanent building. This is a crucial point in terms of any potential market appeal or architectural credibility it seeks to acquire. Furthermore, in terms of colour, composition and materials a significant amount of customisation is permitted on its exterior, and the quality of internal finishes and spaces also offers no trace whatsoever of the building’s temporary nature. 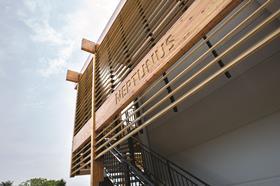 The housing system is based on Neptunus’s Flexolution system, the same one employed on the London 2012 McDonald’s. It is a simple, semi-permanent construction solution that has previously been applied to temporary sports halls, warehouses, offices and supermarkets. Although Irenehof is two-storeys high at present, the system can extend up to three storeys. With the exception of its internal stud walls, the building is entirely prefabricated at Neptunus’ manufacturing plant in Poland.

Irenehof is a flat-roof rectangular box that measures 36m x 10m. Unusually, it deploys aluminum rather than a steel frame. Neptunus director Dorrie Eilers explains why. “As aluminium is so much lighter than steel, it allows faster and more efficient build and dismantling. This makes transportation and removing the building from its location easier. Although more expensive, aluminium is far more suitable for re-use and has a more luxurious look and feel.”

Aluminium columns are incorporated into party walls allowing free internal spans within the flats. Fermacell acoustic boards are also installed into the party walls for sound insulation. Timber beams are used within the cross layer floors which have a depth of 1,660mm. No concrete is required during construction, except for the foundation slab on which the frame is built.

External walls are constructed from aluminum sandwich panels which can be fitted around multiple door and window configurations. Internal walls, the only non-prefabricated elements of the construction, are 125mm insulated metal stud which are entirely flexible should the internal layout need to be reconfigured. The construction system even incorporates flexible service entry points, which means that, if necessary, bathrooms and kitchens can be relocated.

Bathrooms, toilets and shower units are similar to those installed on cruise ships and are slotted in as prefabricated, completely fitted-out units that are then linked to the property’s plumbing system. Vinyl rather than tiles is installed on bathroom surfaces in order to speed construction and reduce costs. Vinyl is also used on the floors throughout the flats. 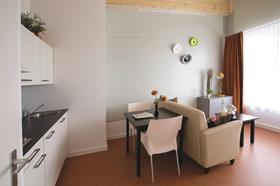 One particularly impressive aspect of Irenehof is the relatively high-ceilings, around 3m in height. This, in conjunction with copious amounts of daylight from large windows, provides a spacious, airy feel to flats that might otherwise feel more cramped.

However, Neptunus concedes that the generous floor-to-ceiling heights are a consequence of the Flexolution system being previously applied to building types where thicker floor depths are normally required to accommodate services, such as offices. As the housing model is refined, ceiling heights may shorten.

Solar panels on the roof provide heating for the flats but are the only instances of renewable energy being deployed in the development. But as Neptunus points out, as all building components are 100% recyclable, this automatically exceeds any equivalent sustainability criteria on a permanent building.

The designers also claim that the system offers huge aesthetic versatility. While the aluminum structural frame is fixed, this can be dressed in all manner of materials or architectural configurations. Irenehof is veiled in a timber screen and pergola structure with two aluminum staircases at either end to serve the upper access deck. While this design makes it look strikingly similar to the London 2012 McDonald’s, the designers insist that there is complete design freedom on future iterations.

As Irenehof employs modular construction, it can also be extended in size if necessary if local demand requires it in the future. The entire building can be fully dismantled, relocated and reassembled in either the same configuration or a completely different one.

Although Irenehof’s construction costs were slightly higher than they would be for a similarly-sized permanent apartment building, Neptunus maintains that when maintenance, recyclability and flexibility savings are taken into consideration, the total costs over the full life of the building are cheaper than they would be for a permanent equivalent. 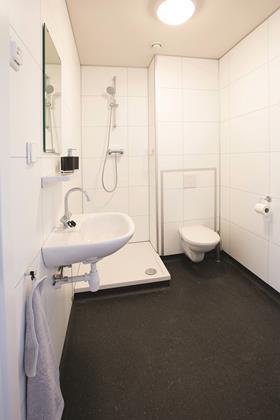 While in Holland Irenehof has already been a success with Limburg councillors hailing it as the solution to fluctuating housing demand, could it help stem the UK’s housing crisis? Naturally Neptunus believes it can and are keen to point out that addressing the housing shortage was a core component of this month’s Queen’s Speech.

Moreover, earlier this year Roger Stirk Harbour announced their £30,000 Y:Cube housing concept for charity YMCA. While these structures are not strictly temporary and have a 60, rather than 20-year, lifespan, in their speed and prefabrication, (eight-week off-site construction programme) they mirror many Irenehof design principles and have been endorsed by Alison Gelder, chief executive of Housing Justice.

But for others, including Mark Farmer, head of private residential at EC Harris, temporary housing is not the solution to the UK’s housing crisis. “It’s missing the point; the issue with the UK market is under-supply, not lifespan. The industry could certainly take lessons here with regard to prefabrication costs and programme - it’s crazy that so much is still built on site, which is labour intensive and expensive. But what we really need is a low-cost permanent housing solution, we need to build more for less.”

While it may take more than temporary builds alone to provide a permanent solution to the UK’s housing crisis, projects such as Irenehof could still have a part to play in finding a long-term answer.