Interserve shareholders have rejected a rescue deal leaving the firm hours away from crashing into administration.

At an extraordinary general meeting held this morning, shareholders voted 60:40 in favour of rejecting the deal.

The firm has said it expects to enter a pre-pack administration this evening as a result of the vote, with the trading of its shares suspended by the Financial Conduct Authority. 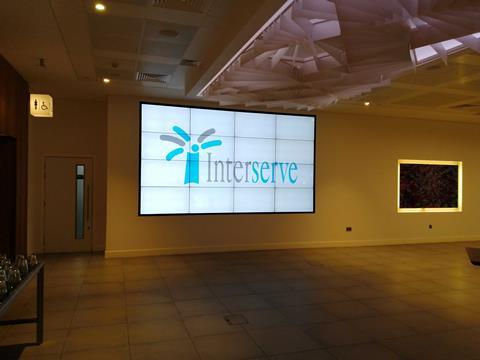 Inside the Interserve extraordinary general meeting.

In an update to the Stock Exchange, the firm said: ”The board of directors of the company is convening an urgent board meeting to consider its options.

”In the absence of any viable alternative, it expects to implement an alternative deleveraging transaction, which is likely to involve the company making an application for administration and, if the order is granted, the immediate sale of the Company’s business and assets (i.e. the entire group) to a newly-incorporated company, to be owned by the existing lenders.

“This transaction would achieve substantially the same balance sheet and liquidity outcomes for the Group as the Deleveraging Plan.

As I said in the #FarmerReview & after Carillion’s demise we are now seeing the inexorable decline of an industry increasingly exposed by a lack of skills, competence & controls all the way from boardroom to building site. All about transactions not outcomes #ModerniseorDie pic.twitter.com/gPVwfhtA3A

“The alternative transaction will be implemented very quickly and via a carefully-managed process and the administration and sale is expected to be completed this evening, ensuring that the business will continue to operate as normal for customers and suppliers.

“It will provide the Group with a strong financial position, allowing it to grow and develop the business, to deliver on its long-term strategy and protect the Group’s employees (including the beneficiaries of the Group’s pension schemes).”

US hedge fund Coltrane, which owns close to 28% of the business, led a rebellion against financial restructuring plans drawn up by the company’s lenders.

Addressing the meeting earlier, Interserve chairman Glyn Barker said the board had worked hard to ensure that even if the firm was placed into administration it could continue as a going concern.

Despite this he said administration was not a good option.

He said: “It’s more disruptive and more costly to the company and it deprives existing shareholders of any value whatsoever.”

Construction analyst Tony Williams told Building: “This is a seismic shock for the industry. It’s so shortsighted. They will trade where they can but some of the bad stuff will have to go. The administrators will be going through the business like a dose of salts. I can’t believe the shareholders voted this down. As for trading, would you trade with them? Should the government?”

A cabinet office spokesperson said the government was not worried about how the latest Interserve news would affect the provision of public services.

He said: “This announcement will not affect jobs or the provision of public services delivered by Interserve. We are in close contact with the company and we are confident a positive way forward will be found.”