Construction set to start next month 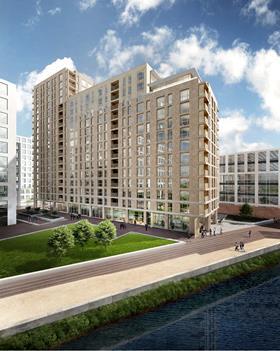 The firm was awarded the multi-million pound contract to deliver the first of four phases, which will include 242 apartments, by development manager Fox Lloyd Jones on behalf of YP Real Estate.

ISG is expected to start work on the site early next month.

The block has been forward sold to build-to-rent specialist Grainger who will own and manage the development, which as well as 242 apartments, will include a resident’s lounge, gym and onsite concierge.

The remaining three plots have planning approval for 400,000ft2 across three buildings, with the developer still weighing up the best usages for the buildings on these plots.

Architect on the scheme at the western end of Wellington Street is Sheppard Robson.

The offices of the Yorkshire Post and the Yorkshire Evening Post were torn down earlier this year leaving only the tower which used to display the newspapers’ logos and digital clock remaining.

The building was designed by Birmingham architect John Madin and opened in 1970 by the Prince of Wales. Madin also designed the Birmingham Central Library, now replaced by Mecanoo’s Library of Birmingham and which was built by Carillion.