Scheme will complete in 2023

ISG has won the first phase of a £300m scheme to build a neurology centre in the middle of London for UCL.

Building understands the value of deal is £110m – double the amount of the highest-value contract the firm would normally pick up.

ISG chief executive Paul Cossell said: “We have the capability to do larger scale projects for selected clients.”

The scheme will be built on Gray’s Inn Road at the site of the Eastman Dental Hospital at the King’s Cross end of the road.

It will also serve as a hub for the UK Dementia Research Institute and will bring together more than 500 researchers into one site to look into treatments for neurodegenerative diseases including Alzheimer’s, Parkinson’s, Huntington’s and vascular dementia. 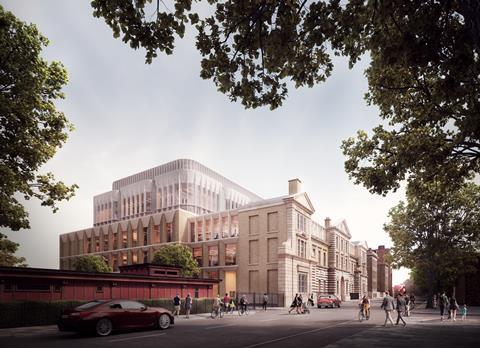 The complex has been designed by Hawkins|Brown

Last autumn, ISG, which yesterday revealed an improved set of annual results for 2018, was chosen to relocate UCL’s dentistry school to a new site in Fitzrovia ahead of work beginning on the neurology centre early next year.

Completion of the centre is scheduled for 2023 with UCL moving in the following year.

The project team is being  led by Arcadis and includes architect Hawkins\Brown while Hoare Lea is M&E engineer with Ramboll appointed to carry out civil and structural engineering.

The scheme is part of a decade-long initiative called Transforming UCL which will see the university spend £1.25bn upgrading its estate which in February saw a £67m student centre built by Mace open its doors in Bloomsbury.