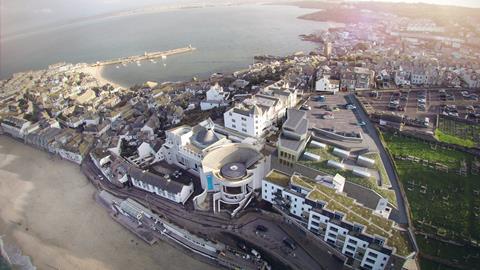 Aerial view of Jamie Fobert’s Tate St Ives. The distinctive drum-shaped entrance of the Evans & Shalev-designed original overlooks the sea with the new extension to the right. Building the new extension was challenging because of sheltered housing at the front, a car park to the rear, and a cemetery on the right

Jamie Fobert has been named Architect of the Year at BD’s prestigious annual awards.

The architect was presented with the Schueco Gold Award for best of the best by comedian Hugh Dennis at a ceremony at the Westminster Park Plaza Hotel in central London tonight.

The practice, which also scooped the award for Public Building Architect in a hotly contested category, was praised by the judges for setting a “benchmark against which everything else has to compete”.

Fobert’s entry presented four projects: the National Portrait Gallery, for which it has just won planning, Kettle’s Yard in Cambridge, Charleston in Sussex and the extension at Tate St Ives, which the judges dubbed a “slam dunk”.

The judges praised the forensic detail he goes into and his “tenacity in building slowly and carefully”.

“He is a single practitioner who is punching above his weight,” they said. “He beat OMA and other really big hitters to land the National Portrait Gallery.”

And Gatti Routh Rhodes, founded in 2013 by Richard Gatti, Tom Routh and Stefanie Rhodes, is the latest emerging practice to be crowned Young Architect of the Year, holding aloft BD’s coveted YAYA trophy.