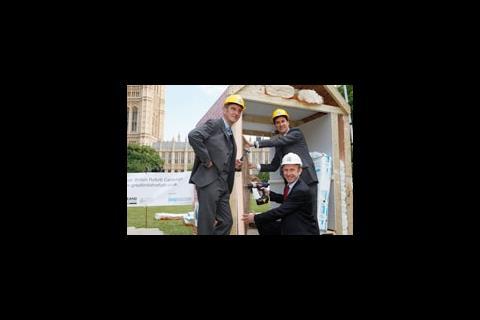 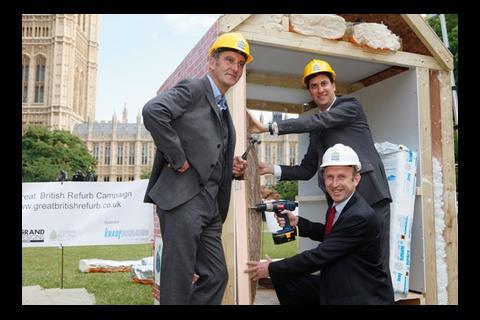 Kevin McCloud has built and insulated his own "home" outside the Houses of Parliament today in a bid to persuade the government to launch a nationwide green refurbishment programme.

McCloud was seeking to demonstrate the impact that tackling poorly insulated, inefficient housing stock could have on reducing energy bills and meeting carbon reduction targets.

McCloud, who launched the Great Britain Refurb Campaign in April, said: “As homeowners, we need look no further than our own four walls to find a way to reduce carbon emissions, save money on our energy bills, and create jobs in our communities. If the government is serious about tackling climate change, help must be given to homeowners on every street in Britain to green their homes.”

Measures called for in the campaign which is supported by a number of organisations including the Energy Saving Trust, UK Green Building Council and WWF-UK, include the introduction by government of new ways to pay for green refurbishment that would reduce the upfront costs as well as providing better financial incentives for householders to refurbish their homes through grants and tax rebates.

He was joined by secretary of state for Energy and Climate Change, Ed Miliband, and opposition spokesmen on climate change Greg Clark (Conservatives) and Simon Hughes (Liberal Democrats) as he delivered the message. It comes in the same week that the government is expected to publish its Energy and Climate Change White Paper outlining plans for reducing carbon emissions.

For more information, or to lend your support, visit the Great British Refurb petition