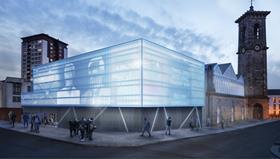 Real Ideas Organisation has picked the firm, which will announce its 2017 interim results next Thursday, to turn the grade II listed Market Hall in Devonport, Plymouth, into a centre for immersive technologies.

It will become a centre for research, enterprise, education and culture in new technologies including virtual reality, augmented reality and mixed reality.

An exhibition centre with a dome shaped virtual reality cinema will be built in the 820m2 extension.

It will have a capacity of 150 visitors and provide a virtual reality experience, with sports matches, concerts and films set to be shown at the venue.

Work is due to start later this spring, with the centre set to open to the public in late 2019.

The project, which was designed by local practice Le Page Architects, was given planning approval in July last year.