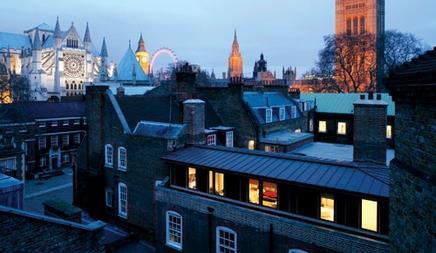 You won’t catch Chris Chivers bragging about his company’s successes.

The chief executive of Killby & Gayford talks modestly about the business he took over in a £15m management buyout last September, but the reason he won’t boast is because he can’t … it’s difficult to brag when your clients include the Royal Household and the government.

The £76m-turnover company’s portfolio contains some high security sites and some prestigious jobs but he can’t even namedrop them when he’s pitching for work. Any clues what they are? “You can call them ‘government buildings’ for the purposes of the article,” he says.

The buyout, in which Close Brothers Growth Capital took a 45% stake, came about after chief executive Terry Smith retired after 37 years with the company. He had led a 3i-backed buyout of his own in 1998. Chivers led the secondary buyout and now he and five other directors own 55%.

He is quick to play down the idea that much has changed since he took over the reigns 10 months ago but the company has certainly sharpened up its act.

Profit margins are up from 3% to 4%, which he puts down to “better planning and becoming more proactive”. He adds: “We’re also embracing IT more – but you automatically get re-energised when you do something like this.” Other plans include a relocation from the Clapham head office in south London to the City.

Chivers is also listening more closely to the opinions of his 314 staff. “We were communicating before but not as actively as we would have liked,” he says. “The next thing I’m planning is a roadshow around the business to talk more about our plans.”

When you know royalty will look at a building, you have to create something stunning.

Not that anything radical is on the cards. In addition to the heritage refurbishment and construction market, the company operates in the banking and laboratory fit-out sectors. It is also the UK’s largest installer of ATM machines (3,000 in 2007) and is used by the Foreign Office to fit security counters at British embassies.

“If you rely too much on any one type of work something will catch up with you, but we’re not suddenly interested in taking on civils work or social housing. We’ve got an exciting mix of businesses,” he says.

One obstacle the company faces as part of its “government buildings” work is red tape. Everyone needs a specific level of security clearance, and passes can take up to eight weeks to obtain. This means it’s difficult to move workers between sites or replace staff quickly if they fall ill.

Chivers says: “There’s a girl in the office whose job it is to process all the forms and she has become an expert at it. It’s like a very complicated passport application.”

Although the credit crunch isn’t yet a threat, Chivers believes it may hit the financial services market in the back half of 2008. Heritage work is so far unaffected. As he says: “Those jobs differ because people recognise the importance of image. When you know royalty will look at it, you have to create something stunning.”

Like most businesses with a decent share of a niche market, the company is of interest to potential buyers. But Chivers dismisses suggestions of a sale. “We’re having fun with what we’re doing and don’t need the distraction. People show interest at the rate of about two a month but you can only take these things seriously if they have a chequebook and pen with them.”

Killby & Gayford at a glance