The BRE received a “significant source of revenue” by producing desktop studies for combustible Kingspan insulation used on Grenfell Tower, the inquiry has heard.

Tom Lennon, a consultant at BRE, a testing body, claimed the studies could be a “huge source of income” for the BRE in a 2015 email.

Desktop studies take the results of full-scale fire tests on cladding systems and model variations to the specification to demonstrate equivalent fire performance.

The email was sent to Stephen Howard, the current BRE director of fire testing and certification, after an architect had sought a desktop study from Kingspan to clear the firm’s K15 insulation as safe to use on a high-rise project.

Lennon, who had been commissioned to write the study, wrote: “We need to come to a decision as to how we proceed with this as this will potentially be a huge source of income over the coming years but could also be a huge liability if not managed properly.

“We have to have some very clear rules about what does and does not constitute reasonable grounds for an assessment/desk top study.”

Howard replied: “Agreed. I have both testing and assessments flying in from all directions at present. Plus each test we generate seems to spawn further openings…” 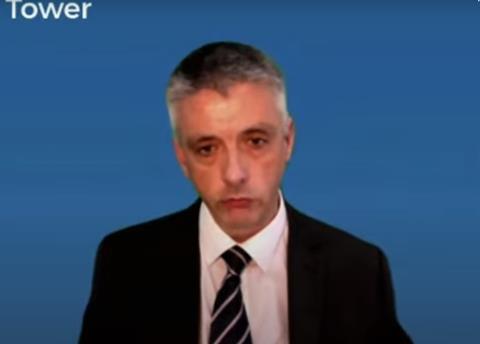 The inquiry heard last week how Kingspan had secured 29 desktop studies on K15, of which the BRE wrote three, on the basis of a failed 2014 test which combined the insulation with high pressure laminate cladding.

Despite the test failure, former BRE burn hall manager Philip Clark had written a report of the test in which the only reference to its failure was on a timeline showing that flames had spread above the rig after 43 minutes and this had been the “end of test”.

None of the 29 desktop studies based on the test report had identified that the test had failed, the inquiry heard last week.

Counsel to the inquiry Richard Millet QC asked Howard yesterday: “Is the reality that Kingspan was potentially a significant source of revenue for the BRE in 2015?”

Howard replied: “Yes, I believe so.”

Monday’s hearing was also shown an email to the BRE in 2009 which flagged a fire certificate produced by the Local Authority Building Control (LABC) which stated that K15 was a material of limited combustibility and meets the ‘Class 0’ standard.

The email, which was sent to Sarah Colwell, BRE technical development director, said that the LABC certificate “appears to give automatic acceptance for [systems] over 18m.”

Colwell then forwarded the email to Howard and his colleague Debbie Smith with an attachment of the certificate, adding: “We need to discuss this urgently.”

But Howard said that he could not recall any further discussion of the certificate, despite admitting that its claim that K15 - a combustible phenolic foam product - was a material of limited combustibility was “wholly inaccurate”.

Millett asked: “Do you remember being concerned that Kingspan had managed to acquire an LABC certificate that gave automatic approvals for use of Kingspan Kooltherm K15 for use over 18 metres?”

Howard replied: “I think there was concern, I can imagine there would be concern, but it would depend on the basis on which that certificate was issued.”

Millet asked: “Do you remember reading the certificate at the time?”

Howard replied: “I don’t remember reading the certificate. I probably did, but I don’t recall.”

The inquiry was also shown an email from BRE staff member Tony Baker, which warned that the construction industry was getting “very confused” about Kingspan’s marketing of K15.

The July 2013 email, which was sent to Howard, read: “I believe the test data available from [Kingspan] would be very limited and the market is starting to get very confused through clever marketing by [Kingspan].”

Howard told the hearing that he could not remember the email and could not “really” explain what Baker had meant by “clever marketing”.

Millett asked: “Were you not interested to know why the market was starting to get very confused through clever marketing by Kingspan?”

He added: “We are providing and supplying into a professional market. I wouldn’t question how confused architects and building control are over that material.

The inquiry has already heard how for over 14 years Kingspan had marketed K15 as safe to use on buildings taller than 18m on the basis of a 2005 test of a chemically different product, dubbed “old technology” K15.

The newer version of the insulation failed several tests and had turned a December 2007 test rig into a “raging inferno” after 17 minutes and had to be extinguished by the BRE for fear it would endanger the laboratory.

Kingspan only withdrew the product from the market in October last year after claiming that it was “now of the view” that the product for sale was different to what had been tested.

K15 was never specified for the refurbishment of Grenfell Tower but was discovered to be present in the cladding system after the June 2017 fire which killed 72 people.