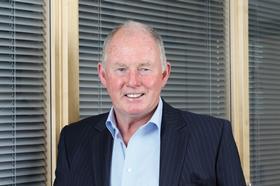 The annual ranking of the UK’s 1,000 wealthiest people puts Kevin Lagan, who masterminded the sale of Lagan Group’s aggregates business to Breedon, as having an estimated fortune of £440m.

Brothers Cormac and Patrick Byrne set up the £257m-turnover Ardmore in 1974 as a small building firm in Brixton, south London, and are now estimated to have a fortune of £170m.

Also making the list with a fortune of £170m is Norman Foster, the founder of Foster + Partners which won last year’s Stirling prize for the Bloomberg building in the City of London.

That scheme was built by Sir Robert McAlpine with the McAlpine family having an estimated fortune of £202m.

Others to make this year’s list include Laing O’Rourke chairman Ray O’Rourke with an estimated fortune of £337m – up from last year’s £306m – while Keltbray owner Brendan Kerr, a new entry last year, remains on the list with a fortune of £152m.

Redrow founder Steve Morgan (pictured), who left the business earlier this year and is a persistent critic of Persimmon’s bonus scheme, saw his fortune tick up £8m last year to £950m while the founder of Persimmon, Duncan Davidson, is estimated to have a fortune of £149m.

Also on the list is James Wates and family with an estimated worth of £300m, while former Bowmer & Kirkland chairman John Kirkland, who stepped down from the role at the Derbyshire contractor earlier this year, is estimated to be worth £585m.

But he is some way behind Anthony Bamford, who is in charge of the JCB construction equipment business, who has an estimated fortune of £4.15bn.